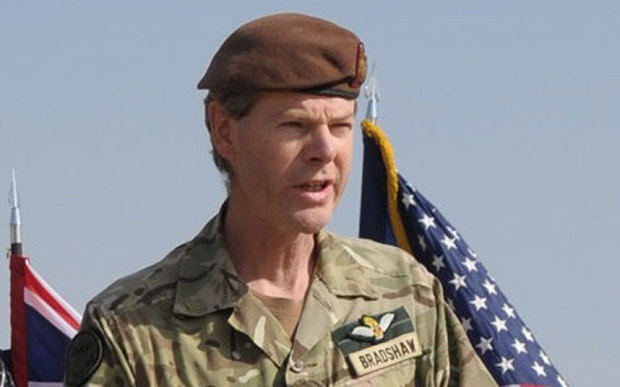 Tensions with Russia could blow up into all-out conflict, posing “an existential threat to our whole being”, Britain’s top general in Nato has warned.

Gen Sir Adrian Bradshaw, deputy commander of Nato forces in Europe, said there was a danger Vladimir Putin could try to use his armies to invade and seize Nato territory, after calculating the alliance would be too afraid of escalating violence to respond.

His comments follow a clash between London and Moscow after the Defence Secretary, Michael Fallon, said there was a “real and present danger” Mr Putin could try to destabilise the Baltic states with a campaign of subversion and irregular warfare.

Sir Adrian told the Royal United Services’ Institute there was a danger such a campaign of undercover attacks could paralyse Nato decision making, as members disagreed over how much Russia was responsible, and how to respond.

Nato commanders fear a campaign of skilfully disguised, irregular military action by Russia, which is carefully designed not to trigger the alliance’s mutual defence pact.

He said the “resulting ambiguity” would make “collective decisions relating to the appropriate responses more difficult”.

But Sir Adrian, one of the most senior generals in the British Army and a former director of special forces, went further and said there was also danger that Russia could use conventional forces and Soviet-era brinkmanship to seize Nato territory.

He said Russia had shown last year it could generate large conventional forces at short notice for snap exercises along its borders. There was a danger these could be used “not only for intimidation and coercion but potentially to seize Nato territory, after which the threat of escalation might be used to prevent re-establishment of territorial integrity. This use of so called escalation dominance was of course a classic Soviet technique.”

He went on to say that “the threat from Russia, together with the risk it brings of a miscalculation resulting in a strategic conflict, however unlikely we see it as being right now, represents an existential threat to our whole being.”

Nato has agreed to set up a rapid reaction force of around 5,000 troops ready to move at 48 hours notice, in case of Russian agression in Eastern Europe. Supplies, equipment and ammunition will be stockpiled in bases in the region. Alliance leaders hope the force will deter any incursion.

David Cameron warned Vladimir Putin there will be more sanctions and “more consequences” for Russia if the ceasefire in Ukraine does not hold.

The Prime Minister vowed that the West would be “staunch” in its response to Russia and was prepared to maintain pressure on Moscow “for the long term”.

He rejected the findings of a scathing parliamentary committee report that the UK found itself “sleep-walking” into the crisis over Ukraine.

The EU Committee of the House of Lords found there had been a “catastrophic misreading” of mood by European diplomats in the run-up to the crisis.

Meanwhile on Friday, Mr Putin said Russia would never yield to foreign pressure and said he would not allow anyone to get a military advantage over Russia.

He said: “No one should have any illusions that it’s possible to achieve military superiority over Russia or apply any kind of pressure on it.” The nation’s military would always have an “adequate response”, he added.

Earlier this week, Mr Fallon said the Russian president might try to test Nato’s resolve with the same Kremlin-backed subversion used in Crimea and eastern Ukraine.

A murky campaign of infiltration, propaganda, undercover forces and cyber attack such as that used in the early stages of the Ukraine conflict could be used to inflame ethnic tensions in Estonia, Lithuania or Latvia, he said.

The military alliance must be prepared to repel Russian aggression “whatever form it takes”, Mr Fallon said, as he warned that tensions between the two were “warming up”.