Giuliani: Obama has been influenced by communism 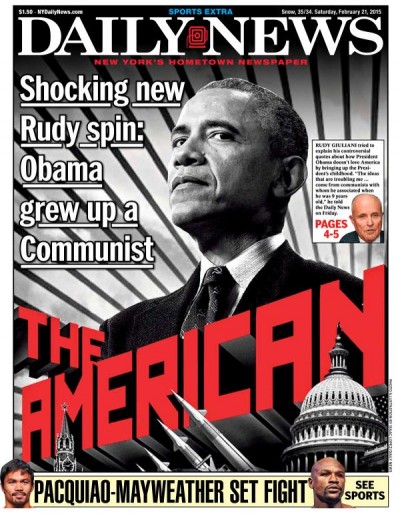 Trying to explain his controversial comments that President Obama doesn’t love America, Rudy Giuliani said Friday that he believes the President has been influenced by communism and socialism.

“Look, this man was brought up basically in a white family, so whatever he learned or didn’t learn, I attribute this more to the influence of communism and socialism” than to his race, Giuliani told the Daily News.

“I don’t (see) this President as being particularly a product of African-American society or something like that. He isn’t,” the former mayor added. “Logically, think about his background. . . The ideas that are troubling me and are leading to this come from communists with whom he associated when he was 9 years old” through family connections.

When Obama was 9, he was living in Indonesia with his mother and his stepfather. Giuliani said he was referencing Obama’s grandfather having introduced him to Frank Marshall Davis, a member of the Communist Party.

Giuliani, a 2008 presidential hopeful, set off a national firestorm when he told an exclusive gathering of conservatives, pols and media figures on Wednesday night, “I know this is a horrible thing to say, but I do not believe that this President loves America.

“He doesn’t love you. He doesn’t love me. He wasn’t brought up the way you were brought up and I was brought up: To love this country,” Giuliani said of Obama at the Manhattan dinner, which was arranged for Wisconsin Gov. Scott Walker.

Even the host of the “21 Club” get together, billionaire Republican John Catsimatidis, distanced himself from Giuliani’s remarks.

“I wouldn’t have said it,” Catsimatidis told the News on Friday. “I respect the position of President.”

Amid the uproar, Giuliani has spent the last two days explaining and contextualizing his comments in various interviews — but refusing to apologize.

In his interview with The News, which had a reporter at the Wednesday night dinner, Giuliani said he stood by his comments about the President because they were “from the heart” and not politically calculated.

If critics are playing them up, he said, “I’m glad they’re making a big deal out of it, (because it’s) an issue of life and death, which is a lack of leadership by our President.”

Most of the likely 2016 GOP candidates have avoided addressing the Giuliani situation at length.

The Milwaukee Journal Sentinel reported Friday that Walker said “no” when asked if Giuliani had crossed the line with his accusations, then added, “I don’t think it’s worth getting into the battle” over whether Obama loves the U.S.A. or not.

“I think it hurts the GOP brand once again,” a Republican strategist said. “It’s these types of comments that make the independent voter just think that we’re crazy!”

Giuliani responded on Friday, “I don’t know how good the political judgment of the people in my party is — because they blew the last two elections.”

Some GOP insiders defended Giuliani and said he is giving voice to what many may believe, but fear to say.

“When the Pope is sounding more hawkish than the President of the United States, then the White House just doesn’t get it,” a longtime party operative said, “and I believe Rudy’s genuinely frustrated about that — as are a lot of other people.”

Meanwhile, White House spokesman Josh Earnest was asked about Giuliani’s comments and said he felt “sorry” for him.

“It’s sad to see when somebody who has attained a certain level of public stature, and even admiration, tarnishes that legacy so thoroughly,” Earnest said.

“And the truth is, I don’t take any joy, or vindication, or satisfaction from that. I think, really, the only thing that I feel is sorry for Rudy Giuliani today.”