Senior Western officials accused Russia on Thursday of redrawing the map of Europe by force and posing a threat to the Baltic states.

Russian President Vladimir Putin was a “real and present danger” to Estonia, Latvia and Lithuania and NATO was getting ready to repel any aggression, British Defense Secretary Michael Fallon said.

Valdis Dombrovskis, vice president of the European Commission, said a stronger NATO presence was needed on the alliance’s borders.

“Russia’s aggression against Ukraine is very worrying for Baltic states,” Dombrovskis, a former prime minister of Latvia, said at an event in London.

“It shows that Russia is looking to redraw Europe’s 21st century borders by force, and it must be noted that Ukraine is not the first country to face Russia’s aggression.”

Fallon, whose remarks were published as Britain scrambled jets to see off Russian Bear bombers, said Putin could launch a campaign of undercover tactics to try to destabilize the three former Soviet republics, all now members of NATO.

“I’m worried about Putin,” Fallon told the Times and Daily Telegraph newspapers, saying there was “a very real and present danger” Russia would adopt the same tactics it used to unsettle eastern Ukraine and Crimea.

“I’m worried about his pressure on the Baltics, the way he is testing NATO. NATO has to be ready for any kind of aggression from Russia whatever form it takes. NATO is getting ready,” he said.

Russia bridled at the remarks.

“The comments of Mr Fallon of course are already beyond diplomatic ethics and the characterization of Russia is completely intolerable,” Foreign Ministry spokesman Alexander Lukashevich told reporters.

“We will find a way to respond to the comments.”

Fallon’s intervention came as fighting raged in eastern Ukraine despite European efforts to resurrect a stillborn ceasefire, a day after pro-Russian separatists forced thousands of government troops out of a strategic town.

Fallon also raised concerns about increased Russian air activity around Britain as his ministry announced the Royal Air Force had escorted two Russian long-range Bear bombers away from the south coast of England the previous day, the second such incident in as many months.

Prime Minister David Cameron said he thought the Russians were trying to make “some sort of a point”, but that he didn’t deem it necessary to dignify it with too much of a response. 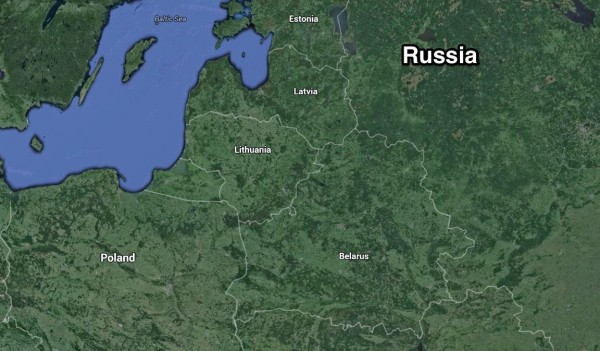 Lithuanian Foreign Minister Linas Linkevicius said Russia posed a threat to the wider region, including Moldova, which on Wednesday chose a pro-European businessman as prime minister.

“Russia is behaving aggressively now as we speak,” he told BBC radio.

“I really do see threats to all countries … I shouldn’t say just to the Baltic states but also with regard to others.”

NATO would react to any threat to his country’s territorial integrity, he said.

“If we fail to react properly to what’s happening in Ukraine, there will be a big temptation (for Russia) to further instigate situations elsewhere and then we will face a bigger problem,” Linkevicius said.

Georgia meanwhile condemned the signing of a border agreement between its breakaway region of South Ossetia and Russia, accusing Moscow of moving closer to annexing a territory it supported in a five-day conflict in 2008.

Georgia, which has ambitions to join NATO, and Russia fought that war over South Ossetia and another separatist region, Abkhazia. After it ended, Moscow recognized both regions as independent countries.