Ukraine forces withdraw from the strategic town of Debaltseve 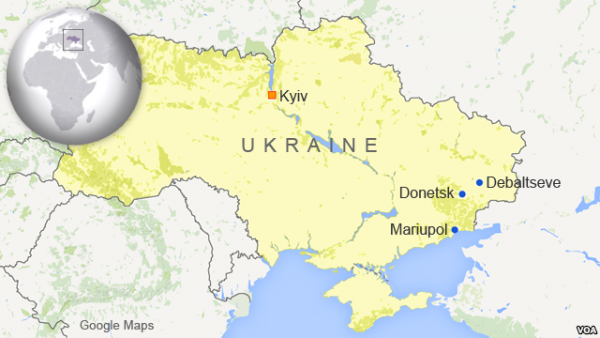 President Petro O. Poroshenko of Ukraine said on Wednesday that Ukrainian forces were withdrawing from the embattled town of Debaltseve, a strategically important transportation hub where intense fighting has raged in recent days despite a cease-fire agreement signed last week.

Mr. Poroshenko sought to cast the retreat in a positive light, but it was clearly a devastating defeat at the hands of Russian-backed separatists.

In a post on Twitter and in a televised statement from an airfield in Kiev before leaving to visit the front line, he called the withdrawal “planned and organized” and said that Ukrainian troops had accomplished their mission.

His comments, however, came after the separatists boasted of controlling the town, and after President Vladimir V. Putin of Russia suggested on Tuesday in Hungary that Ukraine should accept its defeat at Debaltseve by separatist forces he described as “underdogs.”

Andriy Lysenko, a spokesman for the Ukrainian national security and defense council, confirmed the retreat at a briefing in Kiev, the capital, on Wednesday afternoon, and said that the pullout was nearly completed.

“Today, the armed forces of Ukraine are conducting the organized, planned retreat of units of forces of the antiterrorist operation from the city of Debaltseve,” Mr. Lysenko said. “At the moment, almost 80 percent of the Ukrainian units have retreated from this sector, and this operation is to be completed soon.”

The spokesman also accused separatist forces of numerous truce violations in other areas, near the coastal city of Mariupol and in both the Donetsk and Luhansk regions.

The cease-fire agreement, which was negotiated in Minsk, Belarus, by Mr. Putin, Mr. Poroshenko, Chancellor Angela Merkel of Germany and the French president, François Hollande, formally took effect on Sunday, but there was only a brief lull in the fighting.

Although the truce was agreed to on Thursday, the leaders provided no real explanation of the decision to delay its implementation for about 60 hours. Mr. Poroshenko has said that he was willing to accept an immediate halt in the fighting and that the delay was at Russia’s insistence. That seemed to be a reflection of the advantageous position of separatist fighters on the ground in the battle for Debaltseve.

In any event, the delay provided a window for fierce and bloody fighting.

On Wednesday, Mr. Poroshenko also spoke by telephone with Ms. Merkel and Vice President Joseph R. Biden Jr. about the continued fighting, in conversations that highlighted the setback dealt to Ukrainian forces.

He urged the United Nations Security Council to prevent further breaches by Russia and the separatists. In a statement, the Ukrainian presidential administration said that Mr. Poroshenko and Ms. Merkel condemned the cease-fire violations in Debaltseve.

“It is a cynical attack on the Minsk agreements,” Mr. Poroshenko said in the statement. “Today, the world must stop the aggressor.”

Ms. Merkel’s office condemned the separatist offensive, calling it a clear violation of a cease-fire.

At a regular government news conference, Steffen Seibert, Chancellor Merkel’s spokesman, said Europe was prepared to support a new round of sanctions against Russia if the situation in Ukraine continued to deteriorate.

“There has been a massive violation of the cease-fire which took effect on Sunday,” Mr. Seibert said, according to Reuters. He said it was too early to say whether the Minsk peace deal had collapsed.

“The hopes linked to the Minsk agreement have been seriously damaged,” he said. “We must push for the implementation of the package of measures.”

“We see the U.N. resolution as an impulse in this direction, and in the coming days, we will work with the possibilities that we have,” he said.