Jeb Bush trying to distinguish himself from George : ‘Siblings are not clones’ 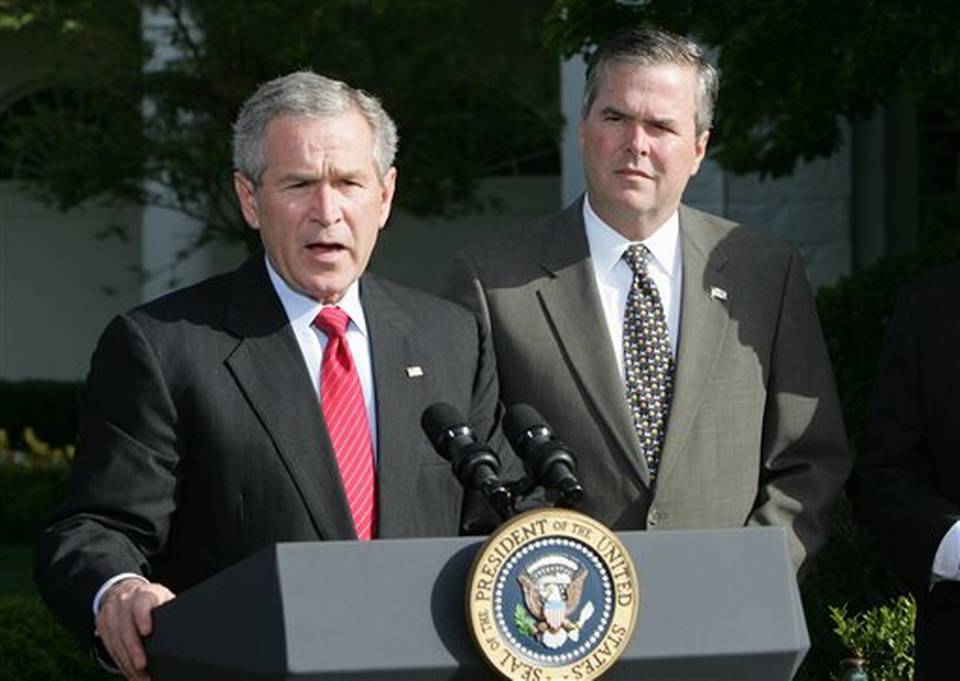 In this April 19, 2006 file photo, President George W. Bush, accompanied by his brother, then-Fla. Gov. Jeb Bush, speaks on the South Lawn at the White House in Washington. The question for Jeb Bush, as it had before and is sure to again, came during a meeting with prospective donors. At a table of Republican donors who helped pay for 2012 GOP presidential nominee Mitt Romney’s campaign, one wanted to know: How does the former Florida governor plan to distinguish himself from his brother, former President George W. Bush? RON EDMONDS, AP PHOTO
Share:

It’s a question Jeb Bush gets often, and will surely get again, over and over.

At a meeting of Republican donors who helped pay for 2012 GOP presidential nominee Mitt Romney’s campaign, one wanted to know: How does the former Florida governor plan to distinguish himself from his brother, former President George W. Bush?

“He said we are bound by religious faith and our family’s values, but have different interests, strategies and leadership styles,” said Craig Duchossois, a Chicago-based investor and GOP donor who was at the meeting.

Others who have attended similar private events with Bush in recent weeks, as he aggressively seeks to raise a pacesetting amount of money before formally launching a 2016 campaign, say Bush has told them the same. His overriding message, although not one yet offered with many specifics: I am my own candidate.

“He dealt with that tough question like a champ,” said another donor at the meeting, Terry Graunke. “He said, ‘We may have the same principles and values, but everybody in our family is different.'”

Part of Bush’s strength in the early days of the 2016 race undoubtedly comes from his family ties, including a robust fundraising network and connections inside the Republican Party built over generations — his father served as president, his grandfather as a member of the Senate.

In public, Bush offers nothing but love and respect for his older brother, a figure who still divides Americans more than six years since leaving office — but less so now than upon his exit from the White House. In private, the younger Bush notes that they differ and see the world differently.

In public, Bush offers nothing but love and respect for his older brother, a figure who still divides Americans more than six years since leaving office — but less so now than upon his exit from the White House. In private, the younger Bush notes that they differ and see the world differently.

“It’s an interesting challenge for me,” Jeb Bush told an audience earlier month, offering a public glimpse into his thinking about how the legacy of his family might impact his own campaign.

“If I have any degree of self-awareness, this would be the place where it might want to be applied,” he told the Detroit Economic Club, earning a chuckle. “If I was to go beyond the consideration of running, I would have to deal with this and turn this fact into an opportunity to share who I am,to connect on a human level with people.”

At this point, few believe Bush isn’t running in 2016. On Wednesday, he will speak to the Chicago Council on Global Affairs to offer his views on the U.S. role in the world, and it’s hard to imagine questions about his brother’s guidance of the country after 9/11 and the subsequent invasions of Afghanistan and Iraq won’t come during the Q&A that will follow.

“Gov. Bush seems to be a detail-oriented person, a policy wonk highly involved in the details, and less of a gut-instinct player,” said Peter D. Feaver, a former special adviser at the National Security Council in the George W. Bush administration. “That would distinguish him from his brother.”

Bush has broken with his brother before, although few times publicly, including during his time as governor, which overlapped with six years of George W. Bush’s administration. In 2003, for example, Jeb Bush publicly criticized the administration over its decision to return 12 suspected hijackers to Cuba.

“Despite the good intentions of the administration to negotiate the safety of these folks, that is an oppressive regime, and given the environment in Cuba, it’s just not right,” he said at the time.

Amid an unpopular war in Iraq and an economy in free fall, George W. Bush left office in January 2009 with 58 percent of Americans holding a negative view of him, according to polls conducted by NBC and The Wall Street Journal.

That view has softened over time, with a NBC/Wall Street Journal poll conducted in September finding 37 percent of Americans with a positive view of the elder Bush brother, 38 percent with a negative view, and 24 percent neutral views.

Jeb Bush brought up the issue on his own during a series of meetings with donors, former governors and top lobbyists last month who were in Washington for a meeting of the National Association of Wholesale Distributors. Some there said Bush affirmed his pride and affection for his father and brother, while noting the siblings are not clones.

A week later, Bush blithely said during a paid speech to the National Automobile Dealers Association in San Francisco that his older brother “has become a painter. Who would have thunk it?” He finished the brief family rundown with a solemn, “I love my brother and his service for our country.”

The brevity, in what was not a political-style speech, struck a vastly different tone about the former president than when Jeb Bush was campaigning in Texas three months earlier for his son, George P. Bush, who ran a winning campaign for state office of land commissioner.

“Ten years from now, mark my word, he will be considered a great president because he got us through very, very difficult times,” Bush said of his older brother.