Obama rallies Congress for unity on war with ISIS 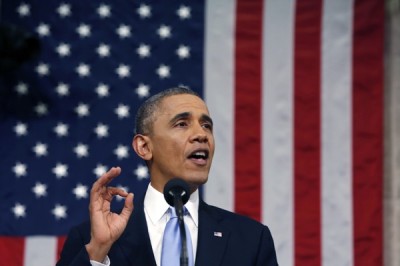 President Barack Obama on Wednesday asked Congress to back a global war against the Islamic State group, albeit with curbs on his ability to send in US ground forces.

Tantamount to a declaration of war, the authority would provide Obama political cover at home and a firmer legal basis on which to prosecute the fight.

In a letter to lawmakers, Obama said granting him war authority “would show the world we are united in our resolve” to defeat jihadist militants who now control swaths of Syria and Iraq.

Since the mid-2014, the US military has been conducting a campaign of airstrikes against IS in Iraq and Syria.

But the request signals a ramping up of pressure on IS as the Iraqi government prepares for a major ground offensive, expected within months.

IS “poses a threat to the people and stability of Iraq, Syria, and the broader Middle East, and to US national security,” Obama said in the letter.

“If left unchecked,” he added, IS “will pose a threat beyond the Middle East, including to the United States homeland.”

With the death of US hostage Kayla Mueller and the killing of three other US hostages, Obama has been under pressure to re-examine his strategy and step up the fight.

But in order to win the backing of the Republican-controlled Congress, and overcome jitters within his own Democratic party, Obama placed limits on his power to deploy the military in both form and scope.

The proposed legislation “does not authorize the use of the United States Armed Forces in enduring offensive ground combat operations,” the draft sent to Congress read.

That does not rule out special forces or hostage rescue operations, but does preclude a ground invasion or peace enforcement mission.

The authorization would also “terminate three years after the date of the enactment of this joint resolution, unless reauthorized.”
Obama will also have to report to Congress every six months.

But there is no geographical limit on the scope of military actions.

With the 2016 elections approaching and the bitter arguments over previous wars still seared in US political memory, Obama was quick to make clear this would not be a sequel to Iraq or Afghanistan.

The text, Obama said, “would not authorize long‑term, large-scale ground combat operations like those our nation conducted in Iraq and Afghanistan.

“Local forces, rather than US military forces, should be deployed to conduct such operations.”

Bipartisan backing for the measure could help head off divisive party splits over the issue.

Republican Senator Bob Corker, who chairs the Senate foreign relations committee, said he would “quickly begin to hold rigorous hearings” on the authorization, which he supports.