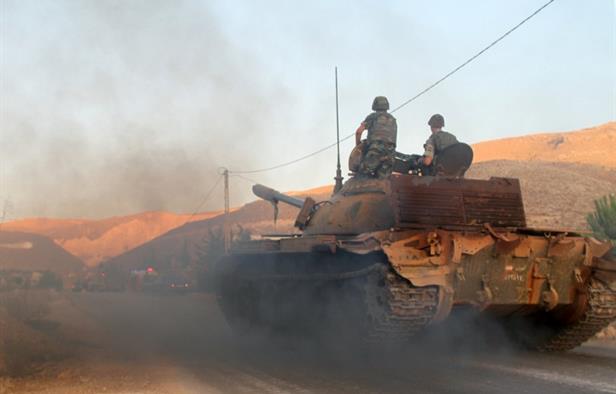 A Lebanese army tank in the eastern Beqaa valley, near the Syrian border.
Share:

RAS BAALBEK, Lebanon — A deep thump reverberates across this Christian village as another artillery shell fired by the Lebanese army rips into the rugged, ochre-hued mountains to the east — which represent the western edge of the regional struggle to defeat the ruthless fighters of the Islamic State in Iraq and the Levant (ISIL).

Hidden in the barren, snow-dusted mountains that mark Lebanon’s eastern border with Syria are an estimated 3,000 guerrillas, mainly belonging to ISIL and Jabhat al-Nusra, Syria’s Al-Qaeda affiliate. Between the armed fighters and the vulnerable Christian, Sunni and Shia villages and towns of Lebanon’s northern Bekaa Valley is a thin line of Lebanese army troops manning hilltop outposts, as well as fighters drawn from the Iran-backedHezbollah organization.

“We are determined that Daesh does not reach one village,” said a senior Lebanese army officer, using the Arabic acronym for ISIL. “They should not even be one meter inside Lebanese territory. It is the [Lebanese] state’s intent to keep the Syrian violence outside Lebanon’s borders.” The officer spoke on condition of anonymity.

A small-scale war of attrition is being waged out of sight in the desolate limestone mountains as the guerrillas ambush army patrols, plant improvised explosive devices or shoot at army positions with heavy machine guns mounted on the backs of pickup trucks.

Despite beefing up its defenses with fortified outposts and observation towers, the army has taken casualties. Seven soldiers died in early December when their soft-skinned patrol vehicle was shot up. On Jan. 23, suspected ISIL fighters overran a Lebanese army position on Hamra Hill, just 1.5 miles east of Ras Baalbek. A grueling eight-hour battle followed, as Lebanese special forces troops fought to retake the hill.

“This wasn’t a little dust-up, this was some serious fighting,” said a foreign adviser to the Lebanese army. He requested anonymity, as he was not authorized to speak to the media.

Instead of staging a hit-and-run assault typical of previous ISIL attacks, this time the fighters attempted to hold the hilltop. But that exposed them to the Lebanese army’s artillery and air power. The adviser said that the fighters “ended up getting slaughtered,” and that the army “roasted” the hilltop with artillery, then went to “pick up the smoking remains.”

Eight Lebanese soldiers died in the battle, and the bodies of 47 fighters were recovered.

Lebanon has long lived in Syria’s shadow and faces increasing spillover from the war tearing apart its larger, more powerful neighbor. In the first half of 2014, suicide car bombers struck multiple times in Shia areas of Lebanon, killing dozens of people in attacks claimed by Sunni groups.

ISIL has imposed a self-declared “caliphate” across a vast stretch of northern Iraq and northeastern Syria, gaining international notoriety for its brutality. The latest example was the videotaped immolation of Moath al Kassasbeh, a Jordanian fighter pilot whose plane crashed in Syria in December.

The threat posed by fighters in the mountains straddling the border has led to an intensified debate in Beirut’s political and diplomatic circles about the possibility of requesting military assistance from the international Arab coalition assembled last year to destroy ISIL.

However, the Lebanese government is unlikely to formally request coalition airstrikes in eastern Lebanon due to the opposition of the powerful Hezbollah. Hezbollah fighters, who run a chain of lofty defensive outposts along the eastern border, have clashed with fighters from ISIL and Jabhat al-Nusra while defending a string of Shia villages in the eastern Bekaa Valley. But last September, Hezbollah leader Sheikh Hassan Nasrallah rejected the newly created international alliance against ISIL, “whether it targets the Syrian regime, Daesh or others.” He accused the United States of being the “source of terrorism in the world” and ethically unqualified to lead a “war against terrorism.” 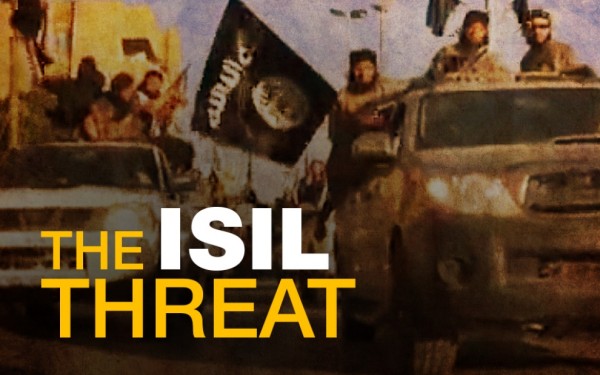 “It’s a sensitive issue,” said Basem Shabb, a Lebanese lawmaker who sits on the parliamentary defense committee. “I don’t think the government is going to approve [a request to the international coalition]. I think the Americans are aware of that, and they are not going to be raising the issue.”

Instead the U.S. is helping the Lebanese army help themselves through the provision of weapons systems, ammunition, training and equipment. In the past year alone, the U.S. has provided $120 million in military assistance. The latest equipment to arrive was dozens of armored Humvees and M109 self-propelled 155 mm artillery guns.

In 2013, Saudi Arabia offered the Lebanese army a grant of $3 billion to spend on French weapons systems, the first of which is scheduled to arrive in March. Riyadh gave an additional $1 billion last year to be spent immediately on military equipment.

There is an international recognition that the Lebanese army needs all the help it can get to mount a defense against fighters pushing in from Syria. Last August, fighters from ISIL and other groups overran the Sunni town of Arsal, eight miles south of Ras Baalbek. The fighters retreated to their mountain redoubt a few days later as part of a cease-fire deal, but took with them more than 30 captured soldiers and policemen, and large quantities of looted arms and ammunition.

Now the residents of Ras Baalbek fear a similar fate, and the sounds of regular fighting in the mountains to the east provide scant reassurance.

“Daesh is trying to take over Ras Baalbek and use it as a bargaining chip. If they assemble 1,000 fighters and charge toward us from the mountains, how can we stop them?” said Rifaat Nasrallah, a village resident and leader of the local paramilitary defense force. In coordination with Hezbollah, Nasrallah’s men patrol the mountainous outskirts of the village and run small observation positions. Although he’s a Christian, Nasrallah has mounted pictures of Hezbollah leaders on his wall in a display of political allegiance.

“We feel betrayed by the Christians of the West,” he said. “Iran gives Hezbollah everything it wants. Daesh gets funds from all the Islamic nations. But most of the Western nations are sitting back, waiting for us to be crucified.”

On a weekday afternoon, little stirs in the narrow streets of Ras Baalbek. The only sounds are the occasional artillery shell fired from nearby army positions, and a chill wind howling across the flat Bekaa plain and buffeting the mountains that soar over the village. Four elderly men wearing traditional ankle-length dishdash gowns and checkered kefiyahs on their heads sat on plastic seats in the village center, mulling what may lie ahead.

“For sure we are worried. They [ISIL] are all over the mountains and the army cannot defeat them,” said Youssef Mansour, 89. “But if they come here, we will not leave, even if we know we are going to die.”