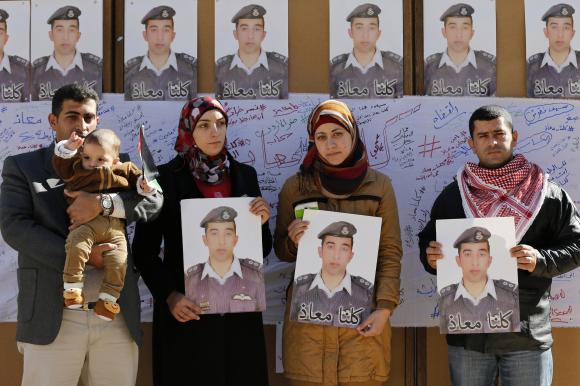 Relatives of Islamic State captive Jordanian pilot Muadh al-Kasaesbeh hold pictures of him as they join students during a rally calling for his release, at Jordan University in Amman February 3, 2015.
Share:

Islamic State has killed 50 people this year in Syria who it accused of insulting God, spying or being enemy fighters, including a Jordanian pilot it burned alive, a monitoring group said on Wednesday.

The Syrian Observatory for Human Rights ( SOHR) said the ultra hardline group killed them mainly through beheadings and shootings.

An Islamic State video showing the burning to death of pilot Muath al-Kasaesbeh, released on Tuesday, sent shockwaves through Jordan which is part of the U.S.-led alliance against the group. Islamic State also published footage last month purporting to show the killing of two Japanese captives.

Other groups in Syria have killed captives. Al Qaeda’s Syria wing Nusra Front killed six while around 20 others were put to death by other insurgents or pro-government groups, said the Britain-based Observatory, which tracks the conflict using sources on the ground. Four of those killed were women.

Islamic State controls swathes of territory in Syria and Iraq. The Observatory reported in November that the group had killed 1,432 captives since declaring a caliphate in June.