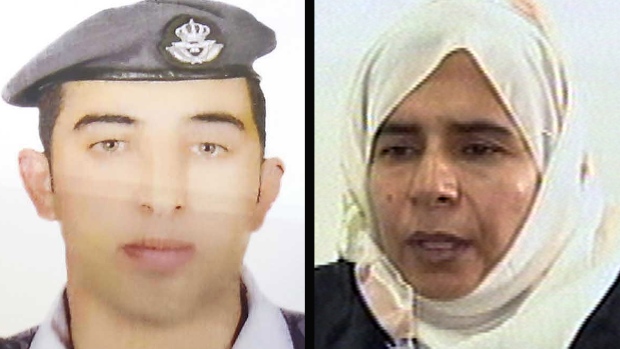 Outrage and condemnation poured across the Middle East on Wednesday as horrified people learned of the video purportedly showing the Islamic State group burn a Jordanian pilot to death.

Even in a region accustomed to the violence of war and the little regard the militants have for life, both political and religious leaders offered angry denunciations and called for blood as some on television wept on air talking about the killing of 26-year-old Lt. Muath Al-Kaseasbeh.

The head of Sunni Islam’s most respected seat of learning, Egypt’s Al-Azhar Mosque, even said that Islamic State militants deserved the Quran-prescribed punishment of death, crucifixion or the chopping off of their arms.

“Islam prohibits the taking of an innocent life,” Ahmed al-Tayeb, the mosque’s grand sheik, said in a statement.

Al-Tayeb said that by burning the pilot to death, the militants violated Islam’s prohibition on the mutilation of bodies, even at wartime.

Iyad Madani, the leader of the 57-nation, Saudi-based Organization of Islamic Cooperation, the world’s largest bloc of Muslim countries, condemned the killing.

It “utterly disregards the rights of prisoners Islam has decreed, as well as the human moral standards for war and treatment of prisoners,” a statement from Madani said. It is sad to see the “the depth of malaise” in parts of the Middle East, along with the “intellectual decay, the political fragmentation and the abuse of Islam, the great religion of mercy.”

Condemnations quickly came from Gulf Arab nations, all of which are close U.S. allies.

“This heinous and obscene act represents a brutal escalation by the terrorist group, whose evil objectives have become apparent,” he said.

The UAE is one of the most visible Arab members in the U.S.-led anti-Islamic State group coalition, which also includes Jordan. Its participation received intense publicity when the government there released photographs of a female UAE pilot that was taking part in the airstrikes.

Bahrain, another Gulf state, denounced the killing as “despicable” and voiced its solidarity with Jordan.

Kuwait’s emir, Sheikh Sabah Al Ahmad Al Sabah, blasted the killing as “criminal” and “vicious” and said it ran against both religion and tradition.

Qatar’s Foreign Ministry also condemned it, saying it is “a criminal act contravening the tolerant principles of the Islamic faith, human values and international laws and norms.”

Al-Kaseasbeh was captured in December when his F-16 crashed while he was flying a mission as part of the U.S.-led air campaign against the Islamic State group.

“Barbarity” was the single-word headline emblazoned across the pan-Arab al-Hayatt newspaper.

“How many Syrian al-Kaseasbehs are there?” asked an article in the left-leaning private Lebanese daily newspaper Assafir. “How many … are there, whose names we are ignorant of, slaughtered by the Islamic State and their brothers? How many Kassasbehs Syrian have fallen in the past four years … without news headlines on the television channels?”

A Jordanian politician in Amman wept on television as he described watching al-Kaseasbeh’s death, saying even a people attuned to violence could not bear witnessing the pain of a man burning to death.