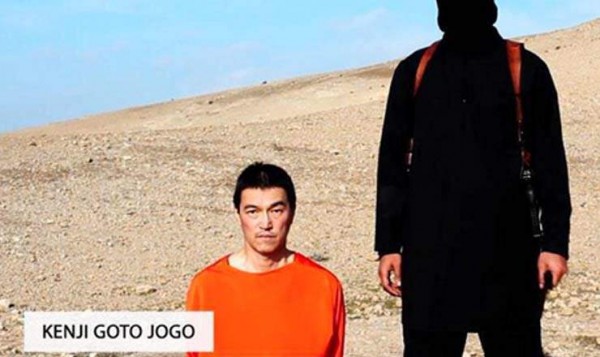 Japan condemned with outrage and horror on Sunday an online video that purported to show an Islamic State of Iraq and Syria (ISIS) militantbeheading Japanese journalist Kenji Goto.

The video posted on militant websites late Saturday Middle East time ended days of negotiations to save Goto, a 47-year-old journalist, and heightened fears for the life of a Jordanian fighter pilot also held hostage.

“I feel indignation over this immoral and heinous act of terrorism,” Prime Minister Shinzo Abe told reporters after convening an emergency Cabinet meeting.

“When I think of the grief of his family, I am left speechless,” he said. “The government has been doing its utmost in responding to win his release, and we are filled with deep regret.”

Abe vowed that Japan will not give in to terrorism and will continue to provide humanitarian aid to countries fighting ISIS.

The defense minister, Gen Nakatani, said that a report from the foreign affairs chief of Japan’s police agency deemed the video “highly likely to be authentic.”

The country was mourning a man who according to friends and family braved hardship and peril to convey through his work the plight of refugees, children and other victims of war and poverty.

“I was hoping Keji might be able to come home,” said Goto’s brother, Junichi Goto. “I was hoping he would return and thank everyone for his rescue, but that’s impossible, and I’m bitterly disappointed.”

Ishido earlier told NHK TV her son’s death showed he was a kind, gentle man, trying to save another hostage. That hostage, Haruna Yukawa, was shown as purportedly killed in an earlier video.

The White House released a statement in which President Barack Obama also condemned “the heinous murder” and praised Goto’s reporting, saying he “courageously sought to convey the plight of the Syrian people to the outside world.”

The White House said that while it isn’t confirming the authenticity of the video itself, it has confirmed that Goto has been slain.

The militants linked the fates of Goto and the Jordanian pilot, Lt. Muath Kaseasbeh, but Saturday’s video did not mention the airman. Jordan’s government spokesman, Mohammed al-Momani, declined comment. Earlier this week, Jordan offered to free an al-Qaida prisoner for the pilot, but demanded and said it never got proof he was still alive.

Late Saturday night, relatives and supporters of the pilot held a candlelit vigil inside a family home in Karak, al-Kaseasbeh’s hometown in southern Jordan.

We “decided to hold this protest to remind the Jordanian government of the issue of the imprisoned pilot Muath al-Kaseasbeh,” said the pilot’s brother Jawdat al-Kaseasbeh, holding picture of Muath with a caption: “We are all Muath.”

The hostage drama began last week when the militants threatened to kill Goto and Yukawa in 72 hours unless Japan paid $200 million.

Later, the militants’ demand shifted to seeking the release of the al-Qaida prisoner, Sajijda al-Rishawi, 44, who faces death by hanging in Jordan for her role in triple hotel bombings in Amman in 2005. Sixty people were killed in those attacks, the worst terror attack in Jordan’s history.

Al-Rishawi has close family ties to the Iraq branch of al-Qaida, a precursor of ISIS.

CBS News correspondent Charlie D’Agata reported that the hostage crisis has left Jordan with tough choices. Handing over the prisoner will be seen as caving in to ISIS, but pressure has been piling on Jordan’s King Abdullah from the public and the pilot’s influential family to bring him home, that trading a failed bomber for a heroic pilot is the right thing to do.