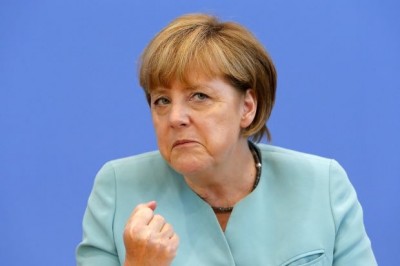 Berlin • German Chancellor Angela Merkel has underlined the refusal of Greece’s European creditors to consider forgiving part of the debt-ridden country’s rescue loans, though she stressed in an interview published Saturday that Berlin’s aim is to keep Greece in the eurozone.

Merkel said in an interview with the daily Berliner Morgenpost that Europe will continue showing solidarity with Greece and other nations hit by Europe’s debt crisis “if these countries undertake their own reform and saving efforts” and fended off a question about the new Greek government’s moves to reverse reforms and rehire suspended workers.

“We — Germany and the other European partners — will now wait and see what concept the new Greek government comes to us with,” she was quoted as saying. But she was clear about prospects of a debt cut.

As for demands that have surfaced in Greece for Germany to pay more compensation for Nazi crimes during World War II, Merkel said that “This question doesn’t arise.”

Merkel said she wants Greece to be successful and acknowledged that “Many people there have hard times behind them.”

“The aim of our policies was and is for Greece to remain a part of the euro community permanently,” she said.

Greece’s new radical left Prime Minister Alexis Tsipras has tamped down the rhetoric by vowing to pay off debts and not act unilaterally.

Finance Minister Yanis Varoufakis, who had a tense meeting with Eurogroup leader Jeroen Dijsselbloem in Athens on Friday, has brought forward a trip to Paris, London and Rome to meet his counterparts.

Tsipras says he never intended to act unilaterally and expressed his certainty that Greece and the creditors will reach an agreement.

He also pledged to pay back Greece’s debt to the European Central Bank and the International Monetary Fund, which, along with the European Commission, form the “troika” of Greece’s creditors.

U.S. Secretary of State John Kerry spoke to Greek Foreign Minister Nikos Kotzias by telephone on Friday to congratulate him on his appointment and underscore “the United States’ interest in continued close bilateral cooperation with Greece,” said a senior State Department official speaking on condition of anonymity. The official said they also discussed the situation in eastern Ukraine and countering terrorism threats in the region.