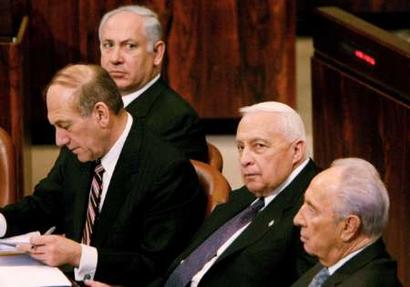 An Iranian website linked to the country’s Revolutionary Guard has suggested assassinating the children of Israeli PM Benjamin Netanyahu in revenge for the deaths of key Hezbollah leaders and an Iranian general.

Mashregh News ran pictures of both Yair and Avner Netanyahu with their father and mother, Sara, depicting them in sniper’s crosshairs and included what they described as a ‘detailed intelligence plan’ of their movements.

The information and pictures were originally published by the Fars News Agency, according to the Washington Free Beacon under the title ‘The file of the Zionist Children’.

The article on the Farsi site said that the pair were acceptable targets for assassination due to their links to top Israeli leaders.

It also describes them as ‘excellences of Zionism’ and ends the article in red letters with the words: ‘We must await the hunt of Hezbollah.’

As well as details about Mr Netanyahu’s children, the article also included the details of the sons of former prime ministers Ehud Olmert and Ariel Sharon.

However, it has been pointed out much of the information was already available on sites such as Wikipedia.

Experts say these type of threats are designed to intimidate the Israelis and act as a deterrent against possible further military action.

The threat comes as Mr Netanyahu said today that Iran is to blame for a deadly flare-up along the Israeli-Lebanese border in the deadliest escalation in the disputed zone since the 2006 war between Hezbollah and Israel.

Israel responded to the missiles with shelling and a Spanish peacekeeper with the UN force in southern Lebanon was also killed.

The area was calm but tense on Thursday and village life appeared to return to normal. But Israeli forces were on high alert and the Lebanese National News Agency said Israeli warplanes were flying low over border villages.

Mr Netanyahu said: ‘It is Iran that is responsible for yesterday’s attack against us from Lebanon.

We will continue to defend ourselves against all threats, near and far alike.’

Iran backs Hezbollah, which declared its attack an act of retaliation for an Israeli airstrike on Hezbollah fighters inside neighboring Syria earlier this month

‘This is the same Iran that is now trying to achieve an agreement, via the major powers, that would leave it with the ability to develop nuclear weapons, and we strongly oppose this agreement,” Mr Netanyahu added referring to the negotiations over Tehran’s nuclear programme.