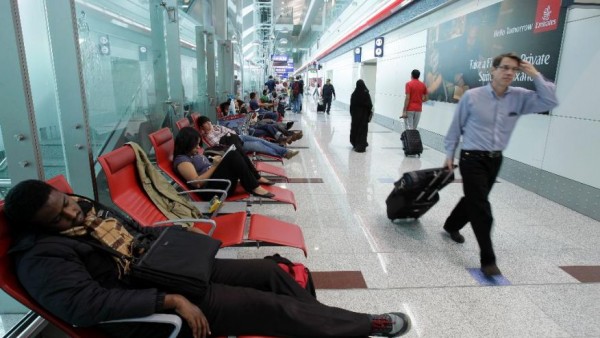 Dubai airport has soared ahead of London’s Heathrow, riding a boom in long-haul flights between Asia and the West to become the world’s top international travel hub, it said Tuesday.

Traffic at the airport increased 6.1 percent last year to 70.47 million passengers, Dubai Airports said, adding that it expected a further surge in traveller numbers in 2015.

Dubai International is home to Emirates, the Middle East’s largest carrier, which along with Abu Dhabi’s Etihad and Qatar Airways has seized a significant portion of travel between the West, Asia and Australasia.

“This historic milestone is the culmination of over five decades of double-digit average growth,” Dubai Airports Chairman Sheikh Ahmed bin Saeed al-Maktoum said in a statement.

“The shared goal is to make Dubai a global centre of aviation and we are nearing that goal,” he said.

Dubai Airports CEO Paul Griffiths said Dubai International would boost its annual capacity to 90 million passengers this year with the opening of Concourse D — a new hall for arrivals and departures.

Oil-poor Dubai has spent years trying to diversify its economy with core sectors now including trade, transport and tourism.

Aided by a rapid expansion in capacity, aviation is expected to account for more than a third of the emirate’s GDP by 2020.

London Heathrow by contrast has struggled to grow, with a commission still studying proposals to increase capacity there and at Gatwick airport, south of London.

The two are among five airports serving the UK capital that form the busiest hub in the world with around 135 million passengers a year.

Heathrow handled 68.1 million international passengers in 2014, according to airport figures.

Dubai’s increase in passenger numbers comes despite a slight fall in the number of flights taking off in 2014, due to 80-day runway refurbishment project.

Emirates Airline in particular has bought more wide-bodied aircraft, including the world’s largest fleet of Airbus A380 superjumbos, helping the average number of passengers per flight at Dubai to grow to more than 200.

Dubai’s surge in traffic “is no doubt due to the massive A380 fleet at Emirates,” said aviation expert Addison Schonland.

“The airline has proven the A380 can be used anywhere in a profitable way. If Emirates keeps growing as it has so far, Dubai’s airport will have to keep growing along with it,” said Schonland, a US-based consultant with AirInsight.

Flights to and from Western Europe saw the biggest passenger growth in Dubai, followed closely by destinations in the Indian subcontinent, Asia and North America.

European airlines, notably Air France-KLM and Lufthansa, have voiced concern at increased activity by Gulf-based companies, complaining of differences in taxation that they say cause unfair competition.

Dubai’s other airport, Al-Maktoum International, opened for passengers in 2013 and will be capable of handling 120 million travellers when completed in 2022.

The project launched before the global financial crisis hit in 2009, and originally planned to feature a 160-million-passenger capacity and six runways.

The ambitious plan appeared to have been put on the back burner due to the economic downturn, and the airport instead opened cargo operations in 2010.

A small number of passenger flights began there in 2013 after repeated delays.