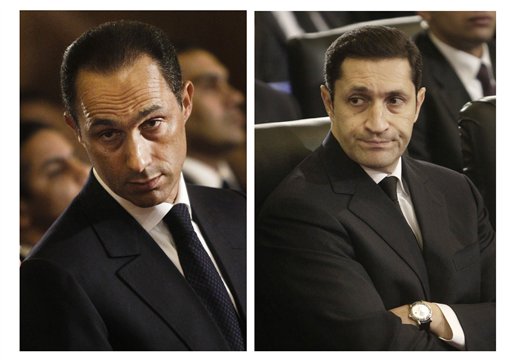 The two sons of ousted Egyptian President Hosni Mubarak were released from prison Monday, nearly four years after they were first arrested along with their father, authorities said.

Interior Minister Mohammed Ibrahim, who is in charge of police and prisons, confirmed the release of the two, but would not say when they walked free. There has been intense speculation among activists in Cairo that they may actually have been secretly freed over the weekend.

The two, along with their father, still face a retrial on corruption charges, for which a date has yet to be set. Separately, the two sons also face trial on insider trading charges. Hearings resume in March. They had been acquitted of other charges.

Mubarak, 86 and ailing, stepped down in February 2011 in the face of a popular uprising. He and his two sons were arrested in April that year. Mubarak remains at a military hospital in a southern Cairo suburb although there are no longer any legal grounds for his detention.

The security officials spoke on condition of anonymity as they weren’t authorized to speak to journalists.

The release of the two had been expected since a Cairo court ordered their release on bail Thursday.

The Mubarak sons were sentenced to four years in prison on charges of using state funds to renovate family residencies. Their father got three years in the case. The sentences were overturned earlier this month.

Mubarak was sentenced to life in prison in 2012 for failing to prevent the killing of some 900 protesters during the 18-day uprising against his rule. That verdict also was overturned on appeal. He was retried but the case was dismissed last month on a technicality.

The brothers, particularly Gamal, are viewed by many Egyptians as among the pillars of an authoritarian and corrupt administration that struck an alliance with mega-wealthy businessmen at the expense of the nation’s poor and disadvantaged.

Mubarak was widely believed to have been grooming Gamal to succeed him. The two consistently denied that, but the perceived succession plan, along with corruption, police brutality and poverty, were among the main engines of the 2011 uprising.

The release of the two sons could spark further protests and would certainly fuel the notion among the secular and liberal activists behind the 2011 uprising that the Mubarak regime has been making a comeback since President Abdel-Fattah el-Sissi, a general-turned-politician, took office in June.

The shooting deaths of two female protesters over the weekend have stoked renewed anger over the police’s use of excessive force. The death of one of the two, 32-year-old Shaimaa el-Sabagh, was captured on several videos that, activists and witnesses claim, point to the police as the perpetrators.

“There may have been violations but that must not be blamed on an entire agency (police) that safeguards internal security,” he said. “Whoever did it must alone be held accountable.”

The death of el-Sabagh has fuelled widespread criticism, even from among the state’s own supporters.

In an unusually critical column published Monday, the chairman of Egypt’s state-run daily Al-Ahram newspaper specifically called out the country’s president as being responsible for protecting the public after el-Sabagh’s death. Ahmed Sayed el-Naggar blamed what he called overzealous police for the killing.

“The rights of Shaimaa rest on our shoulders, especially on those of the elected president (el-Sissi), who is in charge of protecting the lives of the children of this nation at least from the abuse of authority,” he wrote.

El-Naggar also warned that such abuses are alienating youth groups as well as el-Sissi’s own supporters, bringing “the state closer to the policies that people revolted against in the first place.”