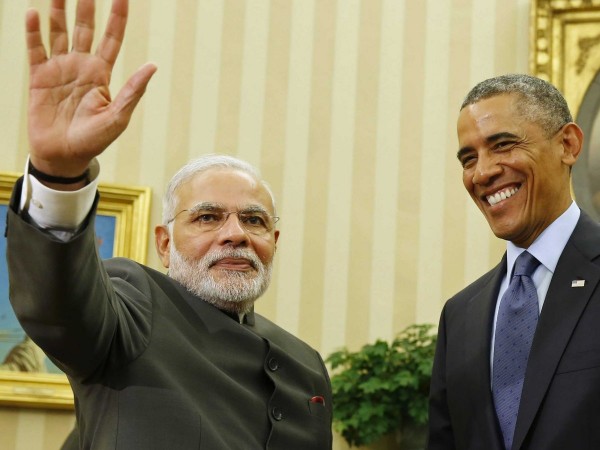 In a fresh bid to make India an enduring strategic partner, U.S. President Barack Obama landed in New Delhi on Sunday for a highly symbolic visit and to nurture friendship with a prime minister who a year ago was persona non grata in Washington.

Obama will be the first U.S. president to attend India’s Republic Day parade, a show of military might long associated with the anti-Americanism of the Cold War, and will host a radio show with Prime Minister Narendra Modi.

His presence at Monday’s procession at Modi’s personal invitation is the latest revival in a roller-coaster relationship between the two largest democracies that just a year ago was in tatters.

“I’d like to think the stars are aligned to finally realise the vision (of) India and America as true global partners,” Obama said in an interview with India Today, a weekly magazine, published on Friday.

Modi greeted Obama and his wife, Michelle, on the tarmac of the airport in New Delhi as they came down the steps from Air Force One. The two leaders hugged each other warmly.

The two sides have worked to reach agreements on climate change, taxation and defence cooperation in time for the visit. Talks on a hoped-for deal on civil nuclear trade went down to the wire with no clear solution at the weekend.

The United States views India as a vast market and potential counterweight to China’s assertiveness in Asia, but frequently grows frustrated with the slow pace of economic reforms and unwillingness to side with Washington in international affairs.

India would like to see a new U.S. approach to Pakistan.

“Particularly with regards to security, and we would like a much greater understanding with the United States with regards to regional issues,” India’s Finance Minister Arun Jaitley said in Davos ahead of Obama’s visit.

Elected last May, Modi has injected a new vitality into the economy and foreign relations and, to Washington’s delight, begun pushing back against China’s growing presence in South Asia.

Annual bilateral trade of $100 billion is seen as vastly below potential and Washington wants it to grow fivefold.

The White House said Obama will depart slightly early from India to travel to Saudi Arabiafollowing the death of King Abdullah, instead of a planned visit to the Taj Mahal.

Like Obama, Modi rose from a modest home to break into a political elite dominated by powerful families. Aides say the two men bonded in Washington in September when Obama took Modi to the memorial of Martin Luther King, whose rights struggle was inspired by India’s Mahatma Gandhi.

The “chemistry” aides describe is striking because Modi’s politics is considerably to the right of Obama’s, and because he was banned from visiting the United States for nearly a decade after deadly Hindu-Muslim riots in a state he governed.

Obama, the first sitting U.S. president to visit India twice, also enjoyed a close friendship with Modi’s predecessor Manmohan Singh, who in 2009 staked his premiership on a controversial deal that made India the sixth “legitimate” atomic power and marked a high point in Indo-U.S. relations.

In a reminder that personal chemistry is not always enough, under Obama ties between Washington and India descended into bickering over protectionism that culminated in a fiery diplomatic spat in 2013 and the abrupt departure of the U.S. ambassador from New Delhi, who has only just been replaced.

“India and the United States are still some distance away from realizing their objective of cementing a strong geopolitical affiliation,” Ashley Tellis, a senior associate at the Carnegie Endowment for International Peace, said in a paper.

The 2009 nuclear deal, which failed to deliver on a promise of billions of dollars of business for U.S. companies, is back on the agenda with bureaucrats meeting three times in the past six weeks to find a workaround to a tough Indian liability law.

“There’s extraordinary potential in this relationship,” Deputy National Security Advisor Ben Rhodes told reporters this week. “What we want to do is turn that potential into concrete benefits for both of our peoples.”