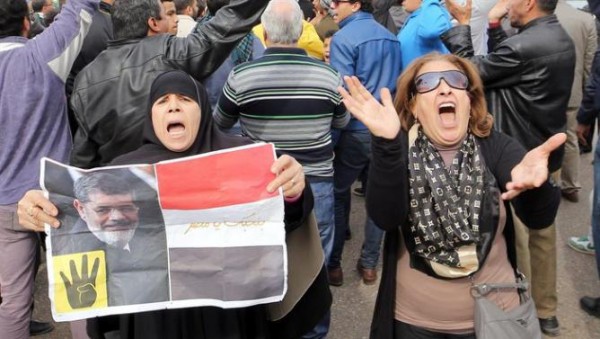 Ousted president Mohamed Mursi supporters gathered near Tahrir and held up photographs of him
Share:
Two protesters were killed in Egypt and a bomb wounded two policemen on Sunday, the anniversary of the 2011 uprising that toppled autocrat Hosni Mubarak, security sources said.

The anniversary is a test of whether Islamists and liberal activists facing one of Egypt’s toughest security crackdowns have the resolve to challenge the U.S.-backed government once again.

Security forces have been stamping out dissent in Egypt since then-army chief Abdel Fattah al-Sisi ousted elected president Mohamed Mursi of the Muslim Brotherhood in July 2013 after mass protests against his rule.

Dozens of protesters were killed during last year’s anniversary of the revolt. This time, security forces were taking no chances, fanning out across the capital and elsewhere.

A protester died on Sunday from birdshot wounds in Alexandria, Egypt’s second biggest city, the security sources said. The Interior Ministry said the man had been armed. A Health Ministry official said the man was 52 years old.

A second protestor was killed by birdshot in the Cairo suburb of Matariya as hundreds of people demonstrated, security sources said.

In the Nile Delta region of Baheira, about 170 km (104 miles) from Cairo, two militants were killed when bombs they were planting exploded, state television reported.

Riot police backed by soldiers in armored vehicles sealed off strategic roads, including those leading to Cairo’s Tahrir Square, the symbolic heart of the 2011 revolt.

In rare defiance, Mursi supporters gathered near Tahrir and held up photographs of him, a Reuters witness said. Police rounded them up.

Police were also dispatched to Rabaa Square in northeast Cairo, where hundreds of Mursi supporters were killed in August 2013 at a protest camp.

A curfew imposed in north Sinai had been extended for three months, authorities said. Islamist militants based in the Sinai Peninsula have killed hundreds of police and soldiers since Mursi’s removal.

After four years of political and economic turmoil following Mubarak’s fall, many Egyptians have overlooked allegations of widespread human rights abuses and praised Sisi for restoring a measure of stability.

Sisi, who served as military intelligence chief under Mubarak, also took bold steps to repair the economy, such as cutting costly fuel subsidies.

But there have been signs of discontent in the run-up to the anniversary of the 18-day revolt.

“The situation is the same as it was four years ago and it is getting worse. The regime did not fall yet,” said engineer Alaa Lasheen, 34.

In a televised address on Saturday, Sisi praised the desire for change that Egyptians showed four years ago but said it would take patience to achieve all of “the revolution’s goals”.

Sisi says his government is committed to democracy. Human rights groups accuse him of restoring authoritarian rule to Egypt, a strategic U.S ally influential across the Arab world.

Opponents say new laws, including one restricting protests, have rolled back freedoms won in the uprising that ended three decades of iron-fisted rule under Mubarak.

Sheikh Youssef al-Qaradawi, an Egyptian-born cleric based in Qatar who supports the Brotherhood, called for protests and said Mursi was Egypt’s “legitimate” leader.

Qaradawi’s outspoken support for the Islamist movement has fueled a diplomatic rift between Qatar and its Gulf Arab allies, which like Cairo consider the Islamist group a security threat.

In Egypt, a crackdown has largely ended demonstrations, but several have taken place in the past week in Cairo and Alexandria. A woman protester was shot dead on Saturday near Tahrir.

Health Ministry spokesman Hossam Abdel Ghaffar said on Sunday Shaimaa Sabbagh, a secular liberal activist, was shot in the face and back. About 1,000 people marched in her funeral procession, a Reuters witness said.

“Shaima was killed in cold blood.” Medhat al-Zahid, vice president of the Socialist Popular Alliance party that Sabbagh belonged to, told a news conference on Sunday.

Interior Ministry spokesman Hany Abdel Latif said an investigation into her death had begun, adding: “No one is above the law.”