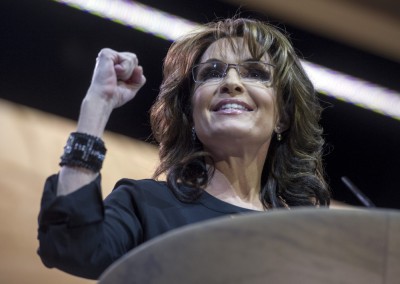 Former Alaska governor Sarah Palin told The Washington Post in an interview Friday that she is “seriously interested” in running for the White House in 2016.“You can absolutely say that I am seriously interested,” Palin said, when asked to clarify her thinking about a possible presidential bid.

Palin, the GOP’s 2008 vice-presidential nominee, said she stood by comments she made Thursday in Las Vegas to ABC News, where she first expressed enthusiasm about potentially competing for the Republican presidential nomination.

“I am. As I said yesterday, I’m really interested in the opportunity to serve at some point,” Palin said Friday, as former Pennsylvania senator Rick Santorum, a potential 2016 rival, looked on.

Palin’s comments, made in an interview in the lobby of the Marriott hotel here, came hours before she is scheduled to address a group of conservative activists at the Iowa Freedom Summit, a gathering hosted by Rep. Steve King (R-Iowa), an immigration hard-liner.

Still, Palin said that she is not yet ramping up a national political operation. Instead, Palin said, she is contemplating her political future and does not feel rushed to make a final decision.

Palin arrived in Iowa Friday alongside Sen. Mike Lee (R-Utah), one of her closest political allies, and Jason Recher, one of Palin’s longtime political advisers. In the lobby, she signed autographs for some hotel guests and mingled with the dozens of GOP figures congregated near the lobby bar, including former House speaker Newt Gingrich.

Palin previously mulled a presidential run ahead of the 2012 election cycle, but declined to enter the contest. During the run-up to the GOP primaries, her supporters built an expansive political network in Iowa on her behalf, in case she jumped in.

On the campaign trail last year, Palin traveled extensively to bolster her handpicked candidates, including stops in Iowa with Republican Joni Ernst, who won a Senate seat. Her political-action committee, SarahPAC, donated to several tea-party favorites.

Robert Costa is a national political reporter at The Washington Post.