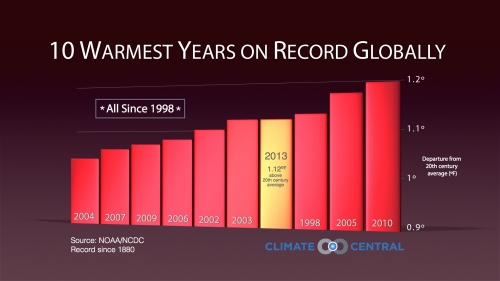 Last year was Earth’s hottest on record in new evidence that people are disrupting the climate by burning fossil fuels that release greenhouse gases into the air, two U.S. government agencies said on Friday.

The White House said the studies, by the U.S. space agency NASA and the National Oceanic and Atmospheric Administration (NOAA), showed climate change was happening now and that action was needed to cut rising world greenhouse gas emissions.

The 10 warmest years since records began in the 19th century have all been since 1997, the data showed. Last year was the warmest, ahead of 2010, undermining claims by some skeptics that global warming has stopped in recent years.

Record temperatures in 2014 were spread around the globe, including most of Europe stretching into northern Africa, the western United States, far eastern Russia into western Alaska, parts of interior South America, parts of eastern and western coastal Australia and elsewhere, NASA and NOAA said.

“While the ranking of individual years can be affected by chaotic weather patterns, the long-term trends are attributable to drivers of climate change that right now are dominated by human emissions of greenhouse gases,” said Gavin Schmidt, director of NASA’s Goddard Institute of Space Studies in New York.

“The data shows quite clearly that it’s the greenhouse gas trends that are responsible for the majority of the trends,” he told reporters. Emissions were still rising “so we may anticipate further record highs in the years to come.”

U.N. studies show there already are more extremes of heat and rainfall and project ever more disruptions to food and water supplies. Sea levels are rising, threatening millions of people living near coasts, as ice melts from Greenland to Antarctica.

Next December, about 200 governments will meet in Paris to try to reach a deal to limit global warming, shifting to renewable energies. China and the United States, the top emitters of greenhouse gases, say they are cooperating more to achieve a U.N. accord.

The new data “is another reminder that climate change is not a problem for the future – it’s happening here and now and we can’t wait to take action,” a White House official said in a statement.

Opponents of the proposed Keystone XL pipeline that would transport Canadian crude oil across the United States said the new data made it all the more pressing to prevent the construction of the pipeline.

But U.S. Senator James Inhofe, a Republican who is the Senate’s leading climate change skeptic, said the temperature difference between 2014 and 2010 was so insignificant as to prove there was no need for more stringent regulations by the U.S. Environmental Protection Agency.

“Human activity is clearly not the driving cause for global warming, and is not leading our planet to the brink of devastation that many alarmists want us to believe,” he said.

The U.N.’s Intergovernmental Panel on Climate Change (IPCC) says it is at least 95 percent probable that human activities, rather than natural variations in the climate caused by factors such as sunspots, are to blame for rising temperatures.

Still, a Paris deal will be hard to achieve since curbs on fossil fuel use are unpopular in many nations. Low oil prices may also discourage a shift to cleaner wind and solar power.

“The political challenges of organizing countries to respond, particularly through the UN process, remain very high,” Michael Levi, a fellow on energy and environment at the Council on Foreign Relations in New York, told Reuters.

Rowan Sutton, director of climate research at Britain’s National Centre for Atmospheric Science at the University of Reading, said a single year did not mean much because it might be a freak hot year.

“But the fact that now 14 of the 15 warmest years on record have occurred since the turn of the century shows just how clear global warming has become,” he said.

Even so, temperatures have not risen as fast as they did in the 1980s or 1990s, taking an unusually warm 1998 as a starting point. The IPCC has described it as a hiatus in warming.

The scientists noted that the record was set in a year that did not have the weather pattern known as El Niño, which can heat up the atmosphere and has been a factor in many past record-setting years, including 1998.

The United Nations says it is already clear that promises for emissions curbs at the Paris summit will be too weak to get on track for a U.N. goal of limiting global warming to 3.6 degrees F (2 degrees C) above pre-industrial times.