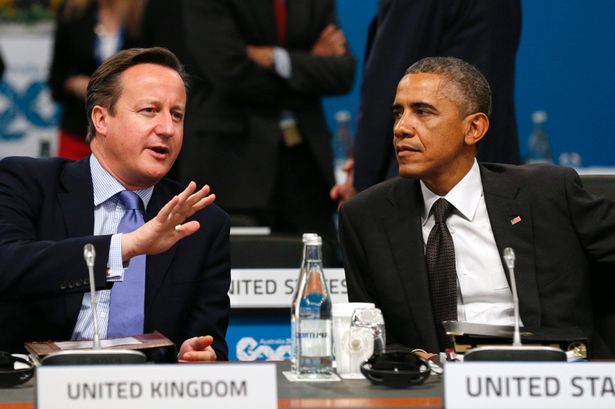 US President Barack Obama on Friday urged European governments to try to better assimilate their Muslim minority populations as they respond to extremist attacks like last week’s shootings in Paris.

But he also warned that the answer to the recent violence must not simply be a security crackdown.

“I know David joins me when I say that we will continue to do everything in our power to help France seek the justice that is needed, and that all our countries are working together seamlessly to prevent attacks and to defeat these terrorist networks,” Obama said.

Obama said the Paris attacks “underscored how terrorist groups like Al-Qaeda and ISIL (ISIS) are actively trying to inspire and support people within our own countries to engage in terrorism.”

The US leader said the 2013 Boston marathon bombing showed that the United States was not entirely safe from Islamic militant cells, but suggested that it had had more success than others in integrating minorities.

“Our biggest advantage, major, is that our Muslim populations feel themselves to be Americans and there is this incredible process of immigration and assimilation that is part of our tradition,” he said.

“There are parts of Europe in which that’s not the case… it’s important for Europe not to simply respond with a hammer and law enforcement and military approaches to these problems.”

And he added: “There also has to be a recognition that the stronger the ties of a North African or a Frenchman of North African descent to French liberties, that’s going to be important over time.”

He said the United States would hold a summit in February on countering violent extremism and the threat of radicalised Islamist fighters returning to their home countries from the war in Syria.

“David and the United Kingdom continue to be strong partners in this work, including sharing intelligence and strengthening border security,” he said, dubbing Britain an “indispensable ally.”

Cameron said the two had agreed to set up “a joint group to identify what more we can do to counter the rise of domestic violent extremism and to learn from one another.”

He described the battle facing Western governments as a “long, patient and hard struggle” and dubbed the enemy a “poisonous fanatical death cult… perverting the religion of Islam.”

The United States and Britain already cooperate closely in global electronic surveillance, and Cameron said the two leaders had agreed to deepen their cooperation on cyber-security.

In a separate statement, the White House said the US National Security Agency and FBI would form a joint cyber-security cell with British domestic intelligence MI5 and eavesdropping agency GCHQ.

This will speed intelligence sharing and strengthen the allies’ defences against cyber-attacks from foreign governments and criminals, the leaders said.

The partners will begin their reinforced cooperation with a year-long exercise to test and strengthen the defences of the financial sector.

In recent weeks, Washington has been embarrassed by the seizure of a military Twitter account by Islamic militant sympathisers and angered by North Korea’s alleged hacking of Hollywood studio Sony Pictures.

But trans-Atlantic partnership has also had successes.

A young hacker – suspected of taking part in attacks that shut down online gaming platforms over Christmas – was arrested Friday in a joint operation with the FBI and British police.

Obama, 53, is beginning his last two years in office, while Cameron, 48, is preparing for general elections in May that are expected to be very close and could mark the end of his coalition government.