Charlie Hebdo: The new cover opens the door to forgiveness 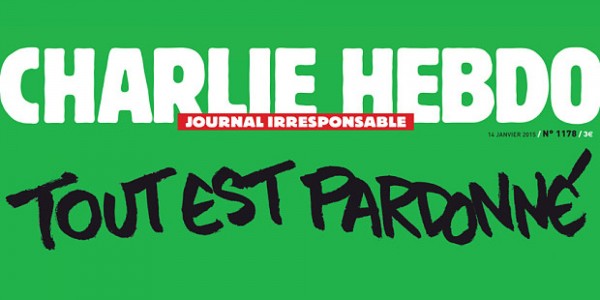 Zineb El Rhazoui, a columnist at Charlie Hebdo magazine who worked on the new issue, told the BBC that the staff didn’t want to express hatred toward the terrorists who killed her colleagues. “The (mobilization) that happened in France after this horrible crime must open the door to forgiveness. Everyone must think about this forgiveness.”
Share:

It is a message of defiance, but also forgiveness — and many Muslims responded with similarly mixed emotions.

It is a magazine cover depicting the Prophet Mohammed with a tear falling from his cheek, holding a sign that says, “Je suis Charlie,” the slogan that became a worldwide meme. Above Mohammed are the words “All Is Forgiven.”

On Wednesday, two Muslim extremists attacked the offices of Charlie Hebdo, a French magazine with a history of mocking Mohammed. Twelve were killed, including several top editors, by two men with terrorist connections who said they were avenging the prophet.

Many Muslims object to any depictions of Mohammed — respectful or not — saying that such images defy his teachings and lead to idolatry.

For the secular satirists at Charlie Hebdo, neither of those concerns seemed to matter much. They often lampooned Mohammed, crudely caricaturing him as a backward, foolish figure.

It’s not surprising that, in its first issue since the attack, Charlie Hebdo again put Mohammed on the cover. But this time, instead of showing the prophet in an unflattering light, the magazine struck a far different tone — and was received by some Muslims in a far different way.

“My initial thought is that the cover is a near perfect response to the tragedy,” said Hussein Rashid, a professor of Islamic thought at Hofstra University in New York.

“They are not backing down from the depiction of Mohammed, exercising their free speech rights. At the same time, the message is conciliatory, humble, and will hopefully reduce the anger directed to the Muslim communities of France.”

Zineb El Rhazoui, a columnist at Charlie Hebdo magazine who worked on the new issue, told the BBC that the staff didn’t want to express hatred toward the terrorists who killed her colleagues.

“The (mobilization) that happened in France after this horrible crime must open the door to forgiveness. Everyone must think about this forgiveness.”

Chosen by Charlie Hebdo’s editors on Monday night, the cover was released by Liberation, the French newspaper that is sharing its office space with staffers from the satirical magazine.

Many media outlets have republished the cover in a show of solidarity. The issue will hit newsstands this Wednesday in a flood of 3 million copies translated into multiple languages.

As the new cover spreads across social media, Muslims responded with a mix of emotions, from wariness to appreciation, from miffed to dismissive.

Yahya Adel Ibrahim, an imam in Australia, counseled his 100,000 Facebook followers to follow the example of Mohammed, even if they encounter images that they believe are blasphemous.

“As it is clear that the cartoons are to be published again, Muslims will inevitably be hurt and angered, but our reaction must be a reflection of the teachings of the one we love & are angered for,” Ibrahim said. “Enduring patience, tolerance, gentleness and mercy was the character of our beloved Prophet.”

On Twitter, some Muslims were skeptical that publishing an image that many consider offensive should be construed as an act of solidarity.

Other Muslims said they appreciate the magazine’s sentiments.

Rashid noted that the cover’s central message — forgiveness — resonates not only throughout Islam but through other faiths as well. “The cover is a call to our better angels, and an acknowledgment that religion also offers good to the world.”

Other Muslim leaders criticized the cover.

“That the depiction appears benign is of little consequence because it will be seen as offensive and deliberately provocative,” said Dawud Walid, executive director of the Michigan chapter of the Council on American-Islamic Relations.

There’s nothing in the Quran, Islam’s primary text, about depicting the prophet.But according to the hadith — stories and sayings attributed to Mohammed and his companions — he discouraged Muslims from making images of him.

Walid said that Charlie Hebdo’s new cover “will offend many” but noted that “over 99.999% of France’s 5 million Muslims acted peacefully when the previous depiction was released.”

Yasir Qadhi, an American cleric with a wide following, said he’s not pleased by any depictions of Mohammed, but it’s clear that this Hebdo cover, unlike others, is not meant to make fun of Muslims.

Qadhi also said that while he respects the right to free speech, there appears to be a double standard when it comes to what Western society — and Hebdo — find suitable for mocking.

“Did you happen to notice any cartoons mocking the death of the cartoonists themselves, and lampooning their work and efforts?” Qadhi asked.

Satire of the type attempted by Charlie Hebdo often serves a valuable end, said Omid Safi, director of Islamic studies at Duke University. But Safi faulted the French magazine for misfiring in its choice of targets.

“I see satire as always having a purpose of mocking the powers that be, hierarchy, power, unearned privileged. So who are we speaking power to today?” Safi said. “Sure, violent terrorists. But what about all the other agents of violence, including the state-sponsored ones? That’s why I don’t find Charlie Hebdo particularly good satire.”

Many Muslims seemed content not to comment on Hebdo’s latest depiction of their prophet, or to pay it no mind.

“Let us ignore the provocations and defamation and get about the work of being a source of good and mercy to all we may come into contact with,” Imam Zaid Shakir, a popular cleric and scholar from California, posted on Facebook this week. “May Allah bless you all and make things easy for you and your families during these trying times.”