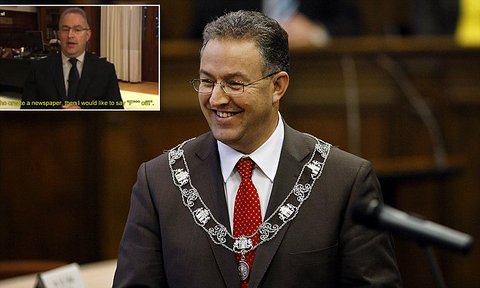 The Moroccan-born mayor of Rotterdam shocked a live television audience this week by telling Muslims who have a problem with Western culture to “pack their bags” and “f— off.” The Muslim Labour politician Ahmed Aboutaleb made the remarks during an interview with a Dutch news program about last week’s deadly attacks on French satirical magazine Charlie Hebdo and is known for his tough stance on Muslim integration in Europe, according to the U.K.’s Daily Mirror.

“It is incomprehensible that you can turn against freedom… But if you don’t like freedom, for heaven’s sake pack your bags and leave,” Aboutaleb said to the Dutch news program “Nieuwsuur” (News Hour). “If you do not like it here because some humorists you don’t like are making a newspaper, may I then say you can f— off.”

Aboutaleb, 53, also argued that Muslims who could not “find [their] place” in the Netherlands were causing ostracism of other Muslims in the country. “All those well-meaning Muslims here will now be stared at,” he said. Muslims make up about five percent of the Netherlands’ population of 16.8 million.

The Rotterdam mayor became the first Muslim immigrant to lead a major European city when he was appointed to the office in 2008. Born to an imam in Morocco’s Rif mountain region in 1961, Aboutaleb moved to the Netherlands when he was 15 and has often been described as a “model non-Western immigrant,” according to Spiegel Online.

Despite his tough stance on Muslim immigrants, Aboutaleb himself has been criticized for his own immigrant background by the far-right Dutch political leader Geert Wilders, who submitted a motion of no-confidence against the then-deputy social affairs minister in 2007 for continuing to hold on to his Moroccan passport, reported Der Spiegel. This, Wilders alleged, meant that Aboutaleb’s loyalty remained to the king of Morocco rather than to the Netherlands.

London mayor Boris Johnson praised Aboutaleb in the U.K.’s Telegraph on Sunday, calling him a “hero” for getting “straight to the point” in condemning the terrorist attacks in Paris, which left 17 people dead last week. “That is the voice of the Enlightenment, of Voltaire… that is the kind of voice we need to hear – and it needs above all to be a Muslim voice,” he wrote.