The Islamic State released a video purporting to show a child executing two men accused of being Russian spies who tried to infiltrate the militant organization in Syria.

The authenticity of the video, released by SITE Monitoring Service, could not be verified.

The video was titled “Uncovering an Enemy Within” and features two men who appear to acknowledge they work for Russian security services.

One of the men says he was recruited by Russia’s Federal Security Service to get close to an unidentified Islamic State fighter.

The men claim they were hired to gather information on the Islamic State, which also goes by the names ISIL or ISIS.

The slender youth with shoulder-length hair appears to be younger than a teenager.Near the end of the video, he purportedly executes the kneeling men with a pistol. 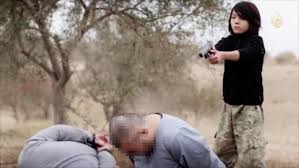 The boy had appeared in an earlier Islamic State propaganda video, saying he was from Kazakhstan and wanted to grow up to kill infidels.

The militant organization has released videos in the past, boasting of its ability to recruit youth and showing training in military tactics.

But a video showing a child executing captives is rare and has prompted outrage in social media.

The video will whip up enthusiasm among the group’s ardent supporters but has triggered “revulsion” in the rest of the world, said Mubin Sheikh, author of the book Undercover Jihadi, a tale of his experience infiltrating terrorist cells in Canada.