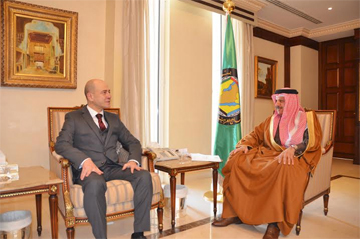 According to the report Zayani handed a protest memorandum to the Lebanese Ambassador in which he calls Nasrallah’s statements ” hostile and irresponsible” and accuses him of inciting violence of meddling in Bahrain’s internal affairs.

According to to BANA the GCC countries considered the statements of Hezbollah secretary-general as contradicting with the historic, brotherly bonds between the GCC-member countries and Lebanon, and for this reason Zayani urged the Lebanese government to clarify its stance vis-à-vis such statements and to taking action against anybody who tarnishes the relations of the Lebanese Republic with GCC countries.

The Bahraini official stressed that such statements were completely incompatible with the nature of the fraternal relations between the two countries and their people, as they harm their efforts to develop these relations in various fields.

In another related development The United Arab Emirates’ Foreign Ministry summoned Lebanese ambassador Hassan Youssef Saad to protest what it described as “hostile” remarks against Bahrain by  Nasrallah.

Nasrallah’s remarks, he said, “incite violence and terrorism and aim to destabilize the security and stability of [Bahrain].”

He added: “The UAE holds the Lebanese government fully responsible for these statements and demands that it issue a clear statement condemning and denouncing such hostile statements.”

In a televised speech, Nasrallah accused Bahrain’s Sunni rulers of “carrying out a Zionist-like project” in the Gulf statelet by “offering citizenship and jobs” to Sunni-Muslim foreigners.