George Clooney: “It’s a humbling thing when you find someone to love” 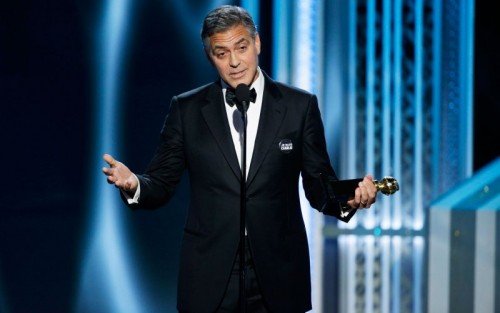 2015 edition of the Golden Globes featured plenty of laughs, but also a beautiful lifetime achievement award speech by the one and only George Clooney.
It started off with a joke, and ended with a rousing standing ovation.

During a cheeky monologue at the 72nd Annual Golden Globe Awards, co-host Tina Fey took aim at George Clooney, who was accompanied by his recent bride, Amal.

“George Clooney married Amal Alamuddin this year,” said Fey. “Amal is a human-rights lawyer who worked on the Enron case, was an adviser to Kofi Annan regarding Syria, and was selected for a three-person UN commission investigating rules of war violations in the Gaza Strip.”

She paused. “So, of course, her husband is getting a lifetime achievement award.”

But it was later in the evening when the 53-year-old Clooney, who was there to accept the Cecil B. DeMille Award for lifetime achievement, stunned the crowded, boozed-up room into silence. Clooney, sporting a “Je Suis Charlie” button on his tux in solidarity with the slain free-speech crusaders at Charlie Hebdo—his father is a former news anchor, and Clooney directed the Edward R. Murrow flick Good Night, and Good Luck—began with a joke about the Sony hack.

“It’s always fun to come here and catch up with old friends and, now that we’ve seen that everyone’s been hacked, it’s also a good chance for us to meet face-to-face and apologize for all the snarky things we’ve said about each other,” he joked.

Then, the ever-gracious gent spoke of the ridiculousness of awards shows, and complimented everyone in the room with him for even getting this far.

“For the record: If you are in this room, you’ve caught the brass ring,” said Clooney. “You get to do what you’ve always dreamed to do and be celebrated for it, and that just… it ain’t losing. I don’t remember what awards Lauren Bacall won. I just remember her saying, ‘You know how to whistle, Steve? You just put your lips together and blow.’ And I have no idea what kind of hardware Robin Williams took home. But I sure remember “carpe diem” and, ‘Seize the day, boys. Make your lives extraordinary.’ I never forget that.”

But it was the finale of Clooney’s speech that really hit home. The Oscar-winning actor, filmmaker, and humanitarian opened up about finding love with wife Amal, a decorated human-rights lawyer, at the age of 53.

“I’ve had a pretty good year myself,” he said. “Listen: It’s a humbling thing when you find someone to love—even better when you’ve been waiting your whole life. And when your whole life is 53 years, Amal, whatever alchemy it is that brought us together, I couldn’t be more proud to be your husband.”

And then Clooney dedicated the final portion of his speech to the unity marches in Paris and beyond in the wake of the Charlie Hebdo shooting.

“And one last thing: To reiterate what we’ve all been talking about, today was an extraordinary day,” said Clooney. “There were millions of people who marched not just in Paris, but around the world. And they were Christians and Jews and Muslims. They were leaders of countries all over the world. And they didn’t march in protest; they marched in support of the idea that we will not walk in fear. We won’t do it. So, Je Suis Charlie. Thank you.