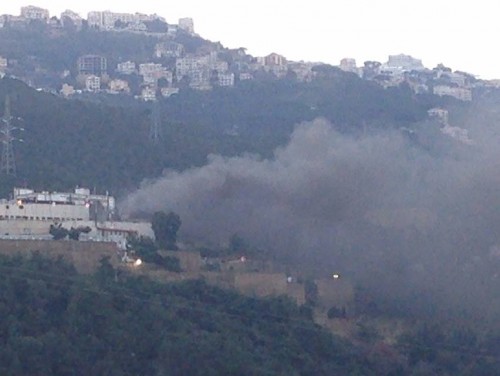 Lebanese security forces stormed a unit of the country’s largest prison on Monday where Islamist militants are detained, security sources said, as authorities searched for those responsible for a double suicide attack at the weekend.

Inmates torched mattresses to protest the move, the sources said, but there were no injuries. The sources said the police were searching for “forbidden items” at Building B in Roumieh prison, where Islamist militants are held.

Roumieh was originally built to hold about 1,500 inmates, but is now crammed with about 3,700.

The prisoners are able to communicate outside with mobile phones and security sources have said some are still involved in attacks against the state.

A double suicide attack on Saturday killed eight people at a cafe in the Lebanese city of Tripoli. It was claimed by the al Qaeda-linked Nusra Front, members of which live in Roumieh prison, where Islamist militants are held.

Protest against the raid 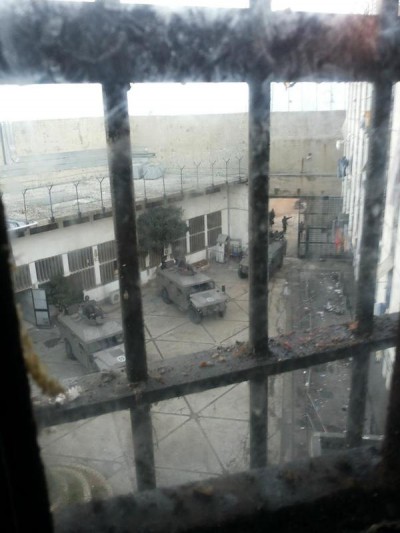 Families and supporters of  the Islamist detainees protested in Lebanon’s north and south Monday against a security raid on Roumieh Prison earlier in the day.

“Our sons are being killed in Roumieh Prison, where are you, O Muslims?!” read a banner held by one of the protesters in Abdel-Hamid Karami Square in Tripoli, north Lebanon.

In the southern city of Sidon, masked gunmen cut off roads leading to two neighborhoods inside the Palestinian refugee camp of Ain al-Hilweh.

The Islamist gunmen, who are led by Palestinian commander Haitham al-Shaabi, fanned out across the streets, blocking access to al-Tawarek and Taamir neighborhoods, after they had received information that a Palestinian prisoner who hails from Ain al-Hilweh had been wounded in the raid in Roumieh, the sources said.

However, the ISF said in a statement that no prisoners were wounded during the operation.

Lebanese Army troops posted at the entrances of the sprawling camp, the largest of Lebanon’s 12 Palestinian refugee camps, stepped up security measures in anticipation of possible escalation, thoroughly checking cars and the identity of motorists entering and leaving the settlement.

In parallel, members of Al-Fouhoud (Arabic for panthers), an elite police force, were deployed near the Justice Palace in Sidon.

The sources said similar precautionary security measures were taken around the serail in the town of Jezzine in south Lebanon, which houses a prison where a large number of followers of fugitive Salafi preacher Ahmad al-Assir, are detained.

The morning crackdown in Roumieh came in the aftermath of information that some of the prisoners were connected to the weekend’s twin suicide attacks that targeted a cafe in Tripoli’s majority Alawite neighborhood of Jabal Mohsen, killing 9 and wounding more than 30.

The Islamist inmates  at the Roumieh prison were arrested in 2007 on charges of fighting or aiding the Fatah al-Islam fighters in the Palestinian Refugee camp of Nahr al-Bared that lies near the northern coastal city of Tripoli.

The al-Qaida-linked  al-Nusra Front said via its account on Twitter on Monday  “due to the deterioration of the security situation in Lebanon you will hear of surprises concerning the fate of the prisoners of war who are in our captivity.” A possible reference to the 25 Lebanese servicemen being held by Al Nusra and ISIS.

The group pointed out that “the government’s inconsiderate act is provocative,” wondering if it “aims at compelling us to begin executing the servicemen.”

It addressed the families of abducted soldiers and policemen, asking if the group “is being demanded to execute their sons.”

“Don’t blame us if we change our manner with the servicemen.”