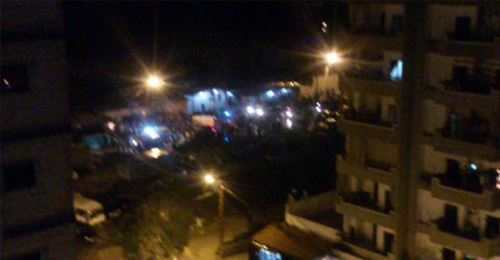 Seven people were killed and scores wounded in an explosion that rocked a cafe in Tripoli’s Jabal Mohse in north Lebanon, National New Agency reported.

Jabal Mohsen is a predominantly Alawite neighborhood of Jabal Mohsen.

Tripoli has been relatively quiet recently after years of tension between its majority Sunni population and its Alawite minority. Embattled President Bashar Assad in neighboring Syria is an Alawite and support for him in Tripoli has sparked violence before. 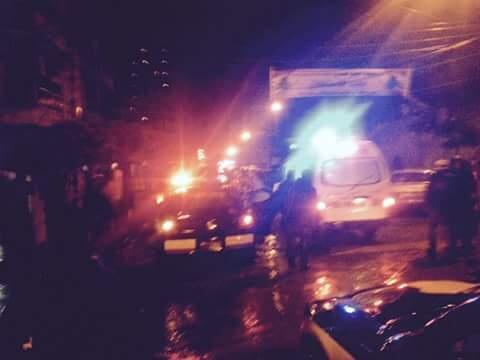 Conflicting reports continue….
Security sources told LBCI: “The explosion that took place in Jabal Mohsen’s cafe was not due to a suicide bombing, but because of a personal dispute that escalated to blowing up 3 hand grenades”

Health minister Wael Abou Faour called for taking all the wounded to the hospital for treatment at government’s expense.

A percussion bomb exploded in the mostly Sunni neighborhood of Bab al Tabbaneh according to security sources.
More to follow

Al Arabiya TV reported that the explosion resulted in the death of 9 people and the wounding of 36 others , while National News Agency reported that 9 people were killed and 35 were wounded
The Arab Democratic Party (ADP) of Jabal Mohsen claimed that the Islamic State carried out the attack and that the suicide bomber was a Yemeni citizen.

The bombing came hours after Lebanon’s judiciary issued a new arrest warrant against the ADP leader Ali Eid after he did not show up for a hearing Saturday.

Eid has been charged with aiding a suspect in the August 2013 twin bombing that targeted the Al-Taqwa and Al-Salam mosques in Tripoli, killing 47 people and wounded dozens others.

Eid and his son fled to Syria when the Lebanese Army started imposing a security plan in Tripoli last April.

The 2 suicide bombers were identified by one of the al Nusra front commanders as as Taha Khayal and Bilal Ibrahim , and said they are both Lebanese citizens and were trained in Syria’s Qalamoun mountain area near the borders with Lebanon and sent to Tripoli to carry out the twin suicide bombings. He added : “The double martyrdom attack as a revenge for the Sunni community in Syria and Lebanon.”

Lebanese Forces leader Samir Geagea was the first to condemn the attack .
Geagea , who is also a presidential candidate urged the security forces to find and prosecute the perpetrators.

condemned the attack which he said aimed at causing confusion, fueling discord and destabilizing Tripoli, after the success of the Lebanese Army and security forces in stopping the cycle of violence in the northern city, confronting terrorist organizations, and reinforcing security.

“This heinous terrorist crime requires concerted efforts from all Lebanese, who should strongly support the Lebanese Army and the security forces in taking the required measures to preserve security, arrest the perpetrators and all those behind them and bring them to justice,” Hariri said.

Prime Minister Tammam Salam also called on the Lebanese to support the Army and security forces against terrorism. He said the attack constituted a new challenge to security forces that had restored peace and stability in Tripoli.

“We tell those sick minds that this crime will not terrorize the Lebanese or the Tripolitans and will not weaken the state’s determination to fight terrorism and terrorists,” Salam said. “Our Army and security forces are on high alert and will continue implementing the security plan and will track down all those looking to harm Lebanon and the Lebanese.”

Salam called on the residents of Tripoli from all confessions and sects to support security forces and thwart attempts to sow strife among them.

Progressive Socialist Party leader Walid Jumblatt also condemned the attack and said the terrorist threat was looming over Lebanon, adding that the Lebanese Army was fully capable of safeguarding the country.

Jumblatt called on the residents of Tripoli to “stand united” against terrorism.