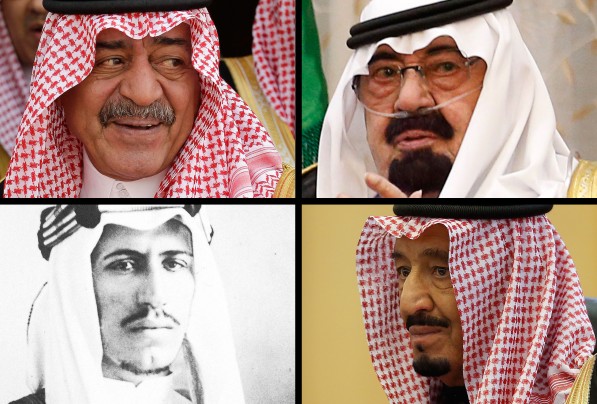 Saudi Arabia’s King Abdullah is ill, the kingdom is facing the lowest oil prices in years (partly by choice) and it remains locked in a regional rivalry with Iran.

Yet Crown Prince Salman, stepping in for the monarch to deliver an annual televised speech to the nation on Tuesday, sought to reassure the public that the kingdom was in steady hands.

“Today, as you know, your country is facing unprecedented regional challenges,” said Salman. “That should make us cautious, and I would like to assure you that your leadership is aware of these challenges and their consequences.”

The king, at least 90, has been in the hospital since last week and this has set off a wave of speculation about the succession plans for the Saudi monarchy and what this might mean for the U.S.

The Risk Of Too Much Stability

Saudi watcher Rachel Bronson isn’t expecting chaos when King Abdullah eventually leaves the throne; she says Saudis know the world is watching and don’t want to further upset the oil markets, where prices have fallen by more than half since last summer.

What concerns her is too much stability in a country that needs to be more agile.

“As it is, it is a very slow-moving state, so anything that slows down decision-making makes it harder for them to fight terrorism, increase liberalization, continue liberalization, which is necessary. All of those things just become very slow,” says Bronson, who’s with the Chicago Council on Global Affairs and is author of the book Thicker than Oil: America’s Uneasy Partnership with Saudi Arabia.

She says if power shifts to Crown Prince Salman, who’s 79, the kingdom could enter a period of very slow decision making — something that happened in the latter part of the rule of King Fahd, who led the country from 1982 until 2005.

“He suffered a stroke in the mid-’90s and continued to rule until he died in 2005,” Bronson says. “And so everything kind of came to a halt, and you didn’t have the agility and flexibility that you need in difficult times.”

These are difficult times for Saudi Arabia. Its regional rivalry with Iran is a perpetual concern, as is the threat of the self-proclaimed Islamic State. And while Crown Prince Salman read out the king’s message today, even he is not in good health, according to Simon Henderson, an expert on the Gulf at the Washington Institute for Near East Policy.

“Prince Salman himself has had at least one stroke, and he’s also been slowing down. This is pretty well accepted by everybody,” Henderson says. “How you actually describe that slowing down is a matter of debate. I’ve tended to think it is some form of dementia.”

The Line Of Succession

While some Saudi watchers think its possible that power could move to him fairly quickly, Henderson isn’t so optimistic.

“There’s every reason why the rivalries and tensions in the house of Saud could lead to some real sharp divisions, which may have been hidden in the past but will erupt into public view,” he says. “That sort of event is bad news for policy against Iran, policy on oil and policy against ISIS.”

Saudi Arabia didn’t do much, he says, when ISIS was threatening Syria and the previous government in Iraq. But with ISIS now on Saudi Arabia’s borders in southern Iraq, it is widely viewed as a direct threat to the kingdom.

“Washington can’t have a hiatus of leadership in Riyadh and it can’t afford anything but a smooth succession,” he adds.

But the U.S. tends to avoid talking about such issues, says Bronson of the Chicago Council on Global Affairs.

“We will continue to engage very actively with the leadership in Saudi Arabia at all the different organizations,” she says. “Whether it’s counterterrorism, intelligence, we will continue to interact, but I think we will stay very quiet.”

Henderson, meanwhile, says the U.S. should be sending discreet messages to the kingdom to make clear that any argument of succession will be damaging to both Saudi and U.S. interests.

Update : Special report by Financial Times
Who will take over?
According to Saudi tradition, the monarchy passes down the line of sons of the founder of the modern kingdom, Abdulaziz bin Saud, or Ibn Saud, who died in 1953.
The crown prince, Salman bin Abdulaziz, was appointed in 2012 and is much more active than his ailing half-brother, but he is 79 and there are also concerns about his health. In 2007, King Abdullah formed an allegiance council of family members to codify the informal succession.

In 2014 the king named his younger brother and close ally, former intelligence chief Prince Muqrin as second crown prince, to ensure a smooth succession after Prince Salman. The 69 year-old Prince Muqrin is the youngest son of Ibn Saud with the ambition or disposition to rule.

Are there any problems with the plan?
Not immediately, but while diplomats expect a smooth handover of power, uncertainty could arise through festering rivalries that will probably intensify as the new leaders carve out power bases for their immediate relatives and supporters within the family. King Abdullah has promoted his sons to positions of power in recent years to support their future prospects.

Crown Prince Salman is a member of the powerful Sudairi clan, whose leader was King Abdullah’s predecessor, King Fahd. The sons of one of Ibn Saud’s favourite wives, Hissa al-Sudairi, the Sudairis have played a pivotal role in the kingdom’s political life, though their power has diminished with the deaths of two of these seven full-brothers, former crown princes Sultan and Nayef.

Some analysts speculate Prince Salman may later wish to nominate his own crown prince after taking the throne. Prince Ahmed bin Abdulaziz, the youngest Sudairi who was removed as interior minister in 2012, could also launch a comeback as heir apparent.

When will the ’younger’, third generation of the al-Saud get to rule?
Analysts also speculate on when the House of Saud’s rolling gerontocracy will allow power to pass down to the next generation — the grandchildren of Ibn Saud. A younger cadre of leaders may be more adept at handling the widening societal divisions that pit young activists calling for greater democracy and social freedom against hardline salafi purists, a number of whom are quietly supportive of violent Islamist extremist groups.

Of the third generation, the interior minister, Mohammed bin Nayef, is well regarded internationally. King Abdullah’s second son, Prince Mitab bin Abdullah, is commander of the country’s national guard and has become an increasingly powerful player. Others are jostling for position ahead of this long-awaited generational shift.

Why does the succession matter?
Saudi Arabia is at the centre of the global oil price collapse. The world’s swing producer has declined to intervene to prop up prices by cutting back output. The strategy is viewed as a means to protect its market share, with Riyadh arguing that it cannot assume the sole burden of protecting prices by lowering production. Blessed with $750bn of foreign exchange reserves, the country is better placed than its rivals to absorb the burden of lower oil prices.

Since the Arab uprisings that exploded in 2011, however, the government has committed itself to higher spending to retain the loyalty of its citizens. Lower oil prices have left a $40bn deficit in this year’s expansionary budget. The prospect of a sustained dip in oil prices has prompted billionaire Saudi royal Prince Alwaleed bin Talal to raise the alarm. Tricky economic reforms aimed at boosting the productivity and level of employment within the Saudi population, as well as reducing costly subsidies, are also potential pitfalls for a new king.
Regional threats also underpin domestic security concerns. The rise of the Islamic State in Iraq and the Levant, known as Isis, has revived concerns about the domestic potency of Sunni jihadi elements. Attacks on westerners and a bloody assault on Shia worshippers have raised concerns. On Monday, a suicide attack near the Iraqi border, where Isis militants are active, further ratcheted up tensions.