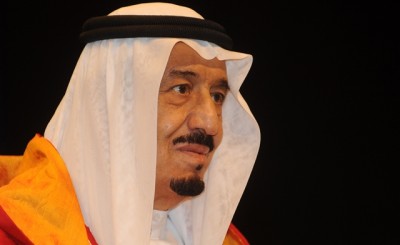 A weak global economy is the main reason for “tensions” in world oil markets, Saudi Arabia’s crown prince said Tuesday, in a speech on behalf of ailing King Abdullah.

Prince Salman also indirectly touched on the violence ravaging Syria and neighboring Iraq, saying Saudi Arabia remains “an oasis of peace” despite turmoil around it.

“You are aware of the urgent tensions taking place in the international oil market, caused by a number of factors, foremost the weak global economic growth,” the prince said in address to the Shura Council, an appointed body that advises the monarch.

“This development is not new in the oil market, and the kingdom has in the past dealt with it firmly and wisely,” he said, adding that Saudi Arabia will maintain its “same approach” towards the market.

The speech would have been given by King Abdullah, aged about 90, but he has been hospitalised since last week with pneumonia.

Global crude prices fell about 50 percent in 2014, mostly since June, and the rout has continued into the new year.

The benchmark US oil price fell below the psychological $50 a barrel level Tuesday for a second day.

Economic growth remains uncertain in Europe and in many emerging economies including China and Brazil.

Along with worries about global demand, analysts have also blamed a strong dollar and a supply glut for oil’s price fall.

Saudi Arabia is the major producer among the Organisation of the Petroleum Exporting Countries (OPEC) cartel, which decided in November to leave crude output unchanged, further pressuring prices.

Oil Minister Ali al-Naimi has been quoted as saying it is unfair to expect the cartel to reduce output if non-members, who account for most of the world’s crude production, do not follow suit.

The royal court announced Friday that Abdullah had pneumonia but was in stable condition and breathing with the aid of a tube.

He was admitted to the King Abdulaziz Medical City in Riyadh on December 31 for checks.

Salman said he wished that “God will grant the king a speedy recovery.” Without naming Iraq and Syria, he said Saudi Arabia “is facing unprecedented regional challenges that resulted from the severe crises that swept through neighbouring or nearby countries and that pushed them to the quagmire of civil wars and sectarian conflicts.”

Jihadists from the Islamic State (IS) group have declared a “caliphate” in parts of Syria and Iraq they have seized, where they have been accused of widespread atrocities.

Since September, Saudi Arabia, Jordan, Bahrain, Qatar, and the United Arab Emirates have been taking part in air strikes against IS jihadists in Syria as part of a US-led coalition.

Salman said the regional situation “should make us cautious, and I would like to assure you that your leadership is aware of these challenges and their consequences,” he said.