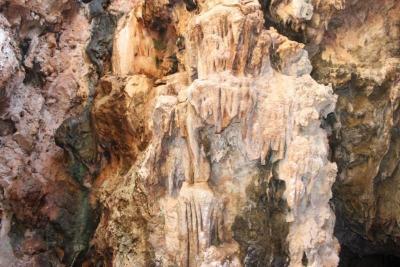 A new Grotto was discovered by accident in south Lebanon town of Majdel Zoon, near the city of Tyre,NNA reported on Sunday.

The cave was formed over thousands of years under a hill which is about 500 meters above sea level and contains stalactites and rock formations similar to the ones found in Jeita Grotto in north Lebanon.

The Cave lied beneath a garbage dump but the heavy rain led to the formation of a pond which later collapsed under the feet of fishermen and exposed the newly discovered grotto.

The reason it reportedly took such a long time to discover the grotto is because it lies on the 1982-2000 border demarcation between Lebanon and Israel .Israel withdrew from the area in 2000 and the UNIFIL forces used the hill for controlling the border area.

Once considered as a finalist for the “7 Natural Wonders of the World”, Lebanon’s Jeita Grotto ranks as one of the top cave complexes on the planet.