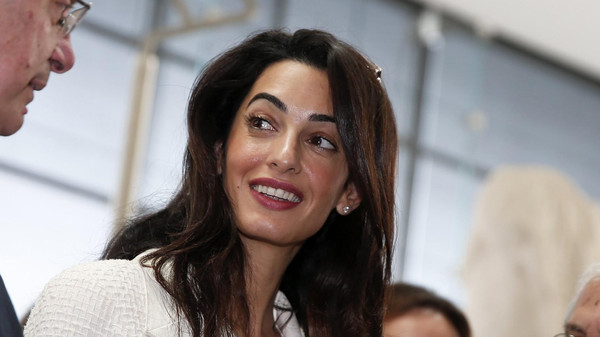 Lebanese-born Barrister and activist Amal Clooney has been named by London-based newspaper the London Evening Standard as the British capital’s most powerful woman.
Share:
Amal Clooney has reportedly been warned by Egyptians officials that she could be arrested after giving a report which points out flaws in the country’s judicial system.

The human rights lawyer, who married Hollywood actor George Clooney, was reportedly given the threat after pointing out the flaws which led to the conviction of three al-Jazeera journalists – Peter Greste, Baher Mohamed, and Mohamed Fahmy.

Amal put the report together before she got involved in the Al Jazeera case, and has now claimed that she was threatened with arrest.

In an interview with The Guardian this week after the journalists’ appeal, Amal said: ‘When I went to launch the report, first of all they stopped us from doing it in Cairo.

‘They said “does the report criticise the army, the judiciary, or the government?” We said “well, yes”. They said “well then, you’re risking arrest”.’

Clooney’s report, which was put together for the International Bar Association, included a recommendation to stop Egyptian officials from picking judges for cases.

She explained: ‘That recommendation wasn’t followed, and we’ve seen the results of that in this particular case where you had a handpicked panel led by a judge who is known for dispensing brutal verdicts.’

The three journalists which are being represented by Clooney were given between seven and ten years in prison in June 2013 by the controversial Egyptian judge Mohamed Nagy Shehata.

During the trial, Mr Shehata rarely took off his sunglasses and hit headlines for mocking Mr Fahmy’s fiancée.

Just a few months after dishing out the sentences to the al-Jazeera journalists, the judge sentenced 188 people to death in a mass trial.

Clooney has reportedly waived her usual costs and is paid by Fahmy, and is convinced that they will succeed due to the lack of evidence against the group.