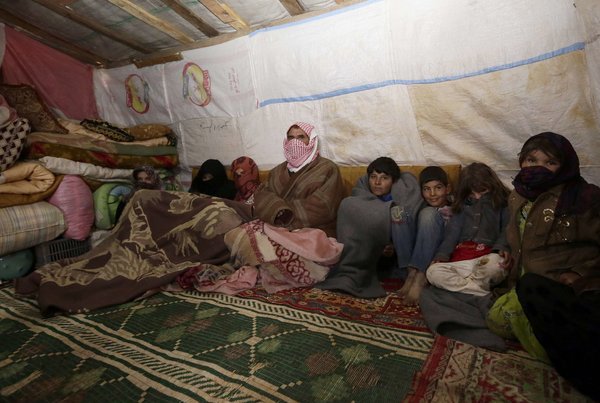 A father, center, and some of his 14 children bundled up against an icy rain in an unofficial refugee camp in Lebanon. The family fled Raqqa Province in Syria. Credit Anwar Amro/Agence France-Presse — Getty Images
Share:

BEIRUT, Lebanon — For the first time since colonial powers carved Syria and Lebanon into separate countries, Syrians will soon need visas to enter Lebanon, the latest and most significant in a series of new measures by Syria’s neighbors to try to control an overwhelming flow of refugees that appears unlikely to end any time soon.

More than three million Syrians have fled their country during nearly four years of war — with more than 1.1 million seeking refuge in Lebanon alone — creating an enduring humanitarian, economic and political crisis that has put extraordinary pressure on Syria’s neighbors, especially Lebanon, Turkey and Jordan.

With no political settlement in sight that would allow the bulk of the refugees to return home, neighboring countries are recasting their policies to recognize the long-term nature of the challenge. Turkey has moved to better integrate the more than one million Syrians it is hosting, granting access to education and social services. But Lebanon and Jordan are moving in the opposite direction, making it harder for Syrians to enter, and more difficult for them to work and receive services once they arrive.

Lebanon’s announcement, which was a New Year’s Eve surprise to Syrians preparing to bid good riddance to a year that was perhaps the deadliest in the war, comes at a time when the United Nations says there are more refugees worldwide than at any time since World War II. The wave of people fleeing war, oppression and extreme poverty has overwhelmed regional governments and prompted humanitarian organizations to press wealthier nations to take in larger numbers of refugees.

“Across the region, there are various measures being taken by host governments that are restrictive on refugees,” said Ron Redmond, a senior spokesman for the United Nations High Commissioner for Refugees. “We understand the reasons they cite for doing this, but at the same time our job is to ensure the refugees aren’t pushed back to someplace where they may be in danger.”

In Lebanon, a country of just four million citizens, in addition to the 1.1 million refugees registered with the United Nations there are an estimated 500,000 who are unregistered. (More than seven million have been internally displaced in Syria.) The visa requirement is scheduled to begin Monday, according to rules published by country’s General Security Agency, which handles border controls and residency permits.

The new rule is a stark symbol of new divisions in the region, given the deep historical ties between the two countries. But it is also an indication of the weakened position of Syria, a country that long influenced Lebanon, sending in troops during its smaller neighbor’s civil war in 1976 and going on to politically dominate the country, maintaining tens of thousands of troops there until 2005.

Syria still requires no visa for Lebanese citizens, a vestige of what was once a no-visa regimen among the Arab countries. Some of those countries have erected new entry barriers for one another’s citizens in recent years as conflict has spread, introducing new economic, sectarian and political strains.

The measure will have an immediate impact on Syrians, for whom Lebanon is the most popular escape route. Not counting border procedures, Beirut is just a two-hour drive from Damascus, along a route still controlled by the government and relatively secure.
In recent months, Lebanon has turned back a growing number of Syrians at the border, on a relatively ad hoc basis, but refugees have still trickled through. Some Syrians cross illegally along porous borders in the mountains, but a large majority of refugees have entered at official crossing points, the United Nations says.

Mr. Redmond said the United Nations refugee agency was studying the measure to learn whether it affected the one million officially registered refugees already in the country. But he added that a gradual tightening of entry requirements had already had a marked effect.

The number of officially registered arrivals in Lebanon in November was down 75 percent from the summer, suggesting that many people were either turned away or did not try to cross because they had heard of the new restrictions.

“We don’t know where they are going,” Mr. Redmond said. “But there have certainly got to be a lot of desperate people.”

The visa announcement caused immediate consternation among those not registered. Some are middle-class professionals who do not consider themselves in need of refugee benefits and have relied on what up to now was an automatically granted six-month residency permit that could be renewed. Others arrived illegally and have not registered because they fear the authorities. Still others are Syrians who travel between the two countries on regular family and work business. Long before the war, hundreds of thousands of Syrians regularly worked as laborers in Lebanon.

At a cafe sparkling with Christmas lights in West Beirut on New Year’s Eve, a crowd of middle-class, antigovernment Syrians danced to Arabic songs. (Some were beloved tunes by pop stars who have emerged during the war as government supporters, but when it came to music, culture and nostalgia trumped politics.)

The party’s host paused to wonder whether it would be the last such gathering in Beirut, which in addition to hosting many destitute refugees has also become a hub of Syrian artists, doctors and activists.

“We don’t know if we will be here dancing next year,” he said. Asked where they might go, he said, “We have no idea.”

The measure says Syrians must apply for one of several types of visas, such as student, business and transit, but refugee was not listed among them. Another route is to be sponsored by a Lebanese citizen.

The Lebanese authorities have also begun to crack down on expired residency permits, anecdotal evidence suggests. There is political tension over the refugees, who are straining schools and hospitals, camping in farm fields and, because they are overwhelmingly Sunnis, threatening to upset Lebanon’s sectarian balance if they stay permanently.

Refugees have a fraught place in Lebanese history: Palestinians who fled the war over Israel’s founding in 1948, and their descendants, remain in impoverished camps and were part of the volatile mix that set off the country’s long civil war a generation ago.

Jordan has announced that it will no longer be able to provide health care for the 623,000 registered refugees on its territory, Mr. Redmond said. (The total number of Syrians in Jordan and Turkey, as in Lebanon, is believed to be much higher than official numbers.) And while the Jordanian government says it has not stopped unrestricted entry, in practice groups of refugees are periodically stranded in a no man’s land on the border, in one recent case for months.