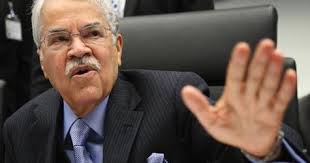 Opec will not cut production even if the price of oil falls to $20 a barrel, the cartel’s de facto leader said, spelling out a dramatic policy shift that will have far-reaching implications for the global energy industry.

In an unusually frank interview, Ali al-Naimi, the Saudi oil minister, tore up Opec’s traditional strategy of keeping prices high by limiting oil output and replaced it with a new policy of defending the cartel’s market share at all costs.

“It is not in the interest of Opec producers to cut their production, whatever the price is,” he told the Middle East Economic Survey. “Whether it goes down to $20, $40, $50, $60, it is irrelevant.”

He said the world may never see $100 a barrel oil again.

The comments, from a man who is often described as the most influential figure in the energy industry, marked the first time that Mr Naimi has explained the strategy shift in detail.

They represent a “fundamental change” in Opec policy that is more far-reaching than any seen since the 1970s, said Jamie Webster, oil analyst at IHS Energy.

“We have entered a scary time for the oil market and for the next several years we are going to be dealing with a lot of volatility,” he said. “Just about everything will be touched by this.”

Analysts say that Saudi Arabia is throwing down the gauntlet to all the high-cost sources of crude — from the oil sands of Canada and US shale to deepwater Brazil and the Arctic — in an attempt to face down the threat they pose to its market share.

Mr Naimi said that if the kingdom reduced its production, “the price will go up and the Russians, the Brazilians, US shale oil producers will take my share”.

Oil has slumped by nearly 50 per cent since mid-June amid a massive supply glut fuelled by surging US shale output, combined with weakening demand for crude in Europe and Asia.

In the past, Opec has cut production when prices fall, such as during the 2008 financial crisis. But at the cartel’s meeting in Vienna last month, members held output steady at 30m barrels a day, sending prices into a tailspin.

The price plunge has thrown the economies of big oil exporters like Russia and Venezuela into disarray and forced oil companies across the world to rewrite their investment plans.

Oil prices fell further on Monday as markets digested Mr Naimi’s remarks. Brent crude, the international oil marker, was down $1.08 to $60.30 a barrel, after falling as low as $59.84 in afternoon trading. It is now hovering at five-and-a-half year lows.

In the MEES interview, Mr Naimi said Saudi Arabia and other Gulf oil producers would be able to withstand a long period of low crude prices, largely because their production costs were so low — at only about $4-$5 a barrel.

But he said the pain will be much greater for other oil regions, such as offshore Brazil, west Africa and the Arctic, whose costs are much higher.

“So sooner or later, however much they hold out, in the end, their financial affairs will limit their production,” he said.

“We want to tell the world that high efficiency producing countries are the ones that deserve market share,” said Mr Naimi added. “If the price falls, it falls . . . Others will be harmed greatly before we feel any pain.”

The bluntness of Mr Naimi’s message took even seasoned Opec observers by surprise. “I’m more bearish than most people looking at the oil price, but even I am stunned how aggressive his comments are about this radical departure from policy,” said Yasser Elguindi of Medley Global Advisors.