Amal Clooney named Most Fascinating (and Stylish) Person of 2014 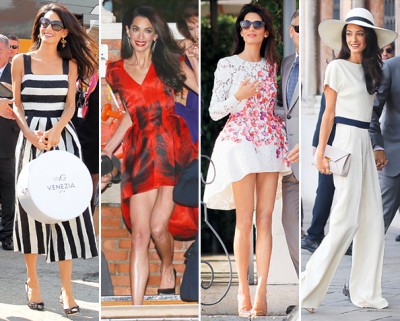 Sure, Amal Clooney (née Alamuddin) married George Clooney in Venice, but we’d drop him in half a second for a tour of her closet. There’s no question that the new Mrs. Clooney is a powerhouse in the courtroom, but the newlywed also has other strong suits—like her sophisticated style choices, which is why she claimed a spot on In Style’s annual Style 100 roundup, featuring all the looks, trends, and pop culture moments that defined the past year.

With a wardrobe full of flirty dresses, tailored pantsuits, chic separates, and plenty of off-duty staples, the British beauty has fashion nailed. Dressed up or down, this smart, successful, and completely gorgeous star has already been spotted in a multitude of winning looks (along with her unforgettable bridal gown). And her quartet of wedding weekend looks still has us swooning—all were utter perfection, whether it was her Dolce & Gabbanastriped midi dress, red-and-black siren number by Alexander McQueen, little lace Giambattista Valli Haute Couture dress, or matching cream separates by Stella McCartney. Recently declared Barbara Walters’s Most Fascinating Person of 2014, Amal’s style is as remarkable as her career—its no wonder George fell in love!

The Lebanese-born Barrister and activist Amal Clooney has been named by London-based newspaper the London Evening Standard as the British capital’s most powerful woman.