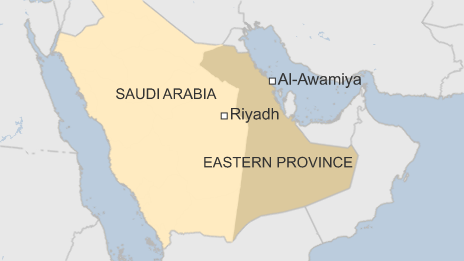 Security forces killed four militants in eastern Saudi Arabia on Saturday in a raid on a hideout used by gunmen who killed a policeman in the area last week, the interior ministry said.

The shootout was the deadliest incident in recent years in Awamiya, a village that has been the focal point of unrest among Saudi Shi’ite Muslims since mass protests in early 2011 calling for an end to discrimination and for democratic reforms in the absolute Sunni monarchy.

“The situation was dealt with in the appropriate manner and as a result four of the terrorists were killed, including the main person responsible for opening fire on the soldier Abdelaziz bin Ahmed al-Assiri,” the spokesman said, referring to the Dec. 14 attack.

Activists said a fifth person died of his wounds and that one of the dead was a 12-year-old boy and another a passerby. More than 20 other people were wounded, they said. It was not possible to verify either version of events.

Activists posted pictures of the aftermath of the raid, in which armoured vehicles were used, showing shattered shop windows, smashed car windshields, walls with bullet holes and a plate full of spent bullet casings collected by locals.

More than 20 people have been killed in the unrest since 2011, most of them local people shot in incidents that police have described as exchanges of fire. Shi’ite rights activists say some of those killed were shot dead while peacefully protesting, which the government denies.

Three people were killed in July 2012 during protests after the arrest of a senior Shi’ite cleric in eastern Saudi Arabia.

Saudi Shi’ites complain it is harder for them to get government jobs than Sunnis, or to build places of worship, and the kingdom’s state-employed clergy use abusive language to describe their sect in sermons and religious text books.

The government denies discrimination and has accused Shi’ite activists involved in attacks on security officers or protests of working on behalf of a foreign power, widely understood to mean Iran. The activists and Tehran deny that.