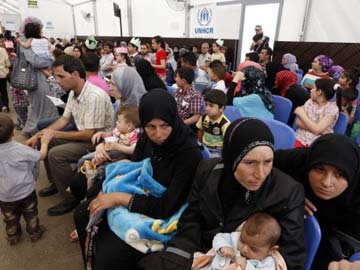 Syrian refugees gather in a room as they wait to be registered at a UNHCR (United Nations Refugee Agency) registration center, one of many across Lebanon, in the northern port city of Tripoli on May 29, 2014. The Lebanese have borne direct and indirect costs of nearly $20 billion as a result of the Syrian refugee crisis
Share:

Nearly 30,000 Syrian children born as refugees in Lebanon are in a legal limbo, not registered with any government, exposing them to the risk of a life of statelessness deprived of basic rights.

It is a problem that is replicated, to varying degrees, in nations across the Middle East where more than 3.3 million Syrians have found safe haven from the intractable civil war in their homeland.

The life of a stateless person is a life without a nationality, without citizenship, without the basic documents that establish an individual’s identity and give him the rights accorded everyone else. Without a birth certificate, identity papers or other documents, even basic things like getting married, going to school or finding a job can be next to impossible.

“If you can’t prove your nationality, it means you can’t get legal documentation, can’t cross borders legally, can’t enjoy any other basic rights that citizens of a country are entitled too,” said Isabella Castrogiovanni, a senior child protection specialist with UNICEF. “So the consequences are obviously huge.”

The United Nations launched a major campaign last month to try to end statelessness for an estimated 10 million people around the world within 10 years.

Syria’s civil war is one of the major trouble spots, with more than 3 million people fleeing to neighboring countries to escape the bloodshed. For Syrian refugee women who give birth, acquiring the legal documentation with the local government is a chief concern. And yet, an estimated 70 percent of the 42,000 children born to Syrian parents in Lebanon since the uprising against President Bashar Assad began in March 2011 remain off the books, according to the United Nations refugee agency.

That figure only relates to the 1.1 million refugees registered with UNHCR. Lebanese officials estimate there are another 500,000 unregistered Syrians in the country. It is not known how many children have been born among that population, but whatever the number, they likely have an even lower rate of registration.

The daily hardships of life as a refugee keep many Syrian parents from registering their newborns: no money, no documents, little time off from work. The process is complicated, with multiple steps that require travel from one government office to another, money for fees and, most importantly, a slew of documents. Without the parents’ marriage license, for example, the birth of a child cannot be registered. But many Syrians had to flee their homeland on short notice and so left legal papers behind, or their papers were destroyed along with their homes.

At a natal clinic in a run-down neighborhood in south Beirut on a recent dreary December morning, around a dozen Syrian mothers with children in tow sat on green plastic chairs waiting for a checkup with the resident midwife. Most of the women said they were aware of the need to register their newborn, but only around half of them had.

Outside, one mother named Khawla from the city of Idlib in northwestern Syria cradled her newborn son in her arms as her curly-haired two-year-old, Mohammed, stomped around the damp pavement.

“It took us eight months to register Mohammed. We’re thinking we may not register him,” she said, nodding at her baby boy, Yousef, asleep in a bundle of clothing in her arms. “My husband works from 5 a.m. to 10 p.m. every day in a grocery store, so he doesn’t have time to go through the whole process. We’re waiting for a miracle to register Yousef.”

For another young mother, who gave her name as Zeinab, the barrier to registering was with the paperwork required by Lebanese authorities.

“I want to register my two youngest,” she said. “The problem is they asked for documents from Syria, but we can’t go back.”

Both women declined to give their last names out of fear of causing trouble with Lebanese authorities.

In Lebanon, the process begins when the child is born and new parents receive a birth notification from an authorized doctor or midwife. The parents must then take that, along with their own identification cards, to the local mayor to get a birth certificate for a small fee.

Then they have to register the birth certificate with a local government department handling family status records. Finally, they must register it again at another office, the provincial personal status department. Each of those steps has its own fees.

The haphazard conditions of refugee life add complications. If the parents married as refugees in Lebanon without getting the proper papers, the process hits a dead end. If a woman gives birth without an authorized midwife or doctor, she can’t even get the birth notification that starts the process.

“We’re getting to the stage where awareness about it is more widespread, but the procedures are a bit difficult to understand … and there are barriers that cause people problems,” said Jocelyn Knight, the protection coordinator for the International Rescue Committee’s office in Beirut.

“I think just because of the number of steps involved, it can be quite daunting for new parents and they’re not really sure what to do.”

The UN refugee agency and non-governmental organizations have been pushing to raise awareness among Syrian refugees across the Middle East of the need to register their children.

The situation is markedly better in Jordan than in Lebanon, for example. There, UNHCR says 70 percent of Syrian babies have been registered.

UN officials say progress has been made in the past six months to raise awareness in Lebanon.

“If you think in terms of the hope for these children to go back to Syria one day, if and when conditions allow, not having any legal document will make them like ghosts going back to their country,” UNICEF’s Castrogiovanni said.