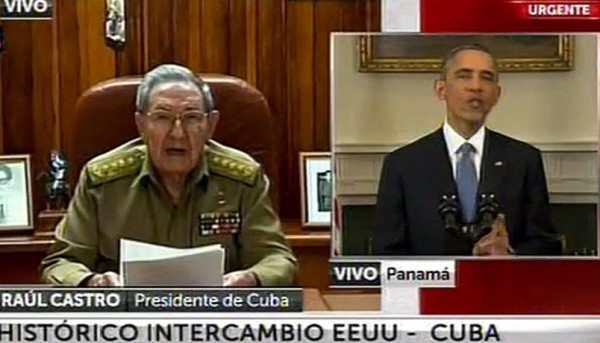 This screen shot taken from live video from the TN channel shows President Barack Obama, right, and Cuba’s President Raul Castro addressing their nations at the same time on Dec. 17, 2014.
Share:
The United States of America and Cuba agreed on Wednesday to restore diplomatic ties that Washington severed more than 50 years ago, and President Barack Obama called for an end to the long economic embargo against its old Cold War enemy.

After 18 months of secret talks, Obama and Cuban President Raul Castro agreed in a phone call on Tuesday on a breakthrough prisoner exchange, the opening of embassies in each other’s countries, and an easing of some restrictions on commerce.

The two leaders made the announcement in simultaneous televised speeches. The Vatican and Canada facilitated the deal.

Obama’s call for an end to the economic embargo drew resistance from Republicans who will control both houses of Congress from January and who oppose normal relations with the communist-run island.

Obama said he was ending what he called a rigid and outdated policy of isolating Cuba that had failed to achieve change on the island.

His administration’s policy shift includes an opening to more commerce in some areas, allowing use of U.S. credit and debit cards, increasing the amount of money that can be sent to Cubans and allowing export of telecommunications devices and services.

Travel restrictions that make it hard for most Americans to visit will be eased, but the door will not yet be open for broad U.S. tourism on the Caribbean island.

His announcement also will not end the U.S. trade embargo that has been in force for more than 50 years. That is codified in legislation and needs congressional approval. Obama said he would seek that approval but will likely face a struggle.

Obama said the opening was made possible by Havana’s release of American Alan Gross, 65, who had been imprisoned in Cubafor five years. Gross’ case had been a major obstacle to improving relations.

Cuba and the United States have been ideological foes since soon after the 1959 revolution that brought Raul Castro’s older brother, Fidel Castro, to power. Washington broke diplomatic relations with Havana in 1961 as Cuba steered a leftist course that turned it into a close ally of the former Soviet Union on the island, which lies just 90 miles (140 km) south of Florida.

The hostilities were punctuated by crises over spies, refugees and the Cuban missile crisis of October 1962 that brought the world to the brink of nuclear war. After the demise of the Soviet Union and the end of the Cold War, Washington was increasingly alone in its efforts to squeeze Cuba. Raul Castro, who took over from Fidel Castro when his brother retired in 2008, has maintained a one-party political system.

Obama said Cuba still needed to enact economic reforms and uphold human rights among other changes, but he said it was time for a new approach.

Critics said Cuba should not be rewarded, having yet to change, and the path to completely normal ties is strewn with obstacles, in particular lifting the embargo that the White House said Obama would like to see dismantled by the time he leaves office in 2017.

Although a growing number of U.S. lawmakers favor more normal ties, those lawmakers are still mostly Democrats, and after big midterm election gains in November, Republicans will control both houses of Congress in the new year.

Senator Marco Rubio, a Cuban American Republican, will be incoming chair of a key Senate Foreign Relations panel and said he was committed to doing all he could to “unravel” the plan. Senators John McCain and Lindsey Graham, both set to hold senior foreign policy positions, said the policy shift reflected “America and the values it stands for in retreat and decline.”

Whatever the criticism at home, Obama’s move was made with the political liberty of a president who, midway through his second term, no longer faces an electorate.

News of the changes rippled fast through the 1.5 million-strong Cuban American community in the United States, hailed by some who are keen to see closer ties with the island and condemned by others.

Older Cubans who left the island soon after the revolution have remained opposed to ties with either Castro brother in power. Younger Cubans, who left more recently or were born in the United States, have shown more interest in warmer relations.

“It’s amazing,” said Hugo Cancio, who arrived in Miami in the 1980 Mariel boatlift and runs a magazine with offices in Miami and Havana. “This is a new beginning, a dream come true for the 11.2 million Cubans in Cuba, and I think it will provoke a change of mentality here too in this community.”

In Havana, stunned Cubans celebrated the news, although some were skeptical that the long years of animosity really would end. In one student demonstration on a busy Havana street corner, about 100 people shut off traffic while motorists honked their horns. Neighbors peered out from their balconies, joining in the cheers.

“I have waited for this day since I can remember,” said taxi driver Jorge Reymond, wiping away tears.

Obama said the Gross case had stalled his ambitions to try to reset relations with Havana, calling it a “major obstacle.” Pope Francis, the first Latin American pontiff, played an active role in pressing for his release from Cuba, where a sizable part of the population is Roman Catholic.

Cuba arrested Gross on Dec. 3, 2009, and sentenced him to 15 years in prison for importing banned technology and trying to establish clandestine Internet service for Cuban Jews. Gross had been working as a subcontractor for the U.S. Agency for International Development (USAID).

Gross’s lawyer and family have described him as mentally vanquished, gaunt, hobbling and missing five teeth. Speaking to reporters after arriving in the United States, Gross thanked Obama for all he had done to secure his release and said he did not blame the Cuban people for his ordeal.

His case raised alarm about USAID’s practice of hiring private citizens to carry out secretive assignments in hostile places. Cuba considers USAID another instrument of continual U.S. harassment dating back to 1959.

The three Cuban intelligence agents, jailed since 1998, are Gerardo Hernandez, 49, Antonio Guerrero, 56, and Ramon Labañino, 51. Two others had been released before on completing their sentences – Rene Gonzalez, 58, and Fernando Gonzalez, 51. The three arrived in Cubaon Wednesday, Castro said.

Despite their decades of animosity, the two countries have long been engaged on a host of issues such as immigration, drug interdiction and oil-spill mitigation.