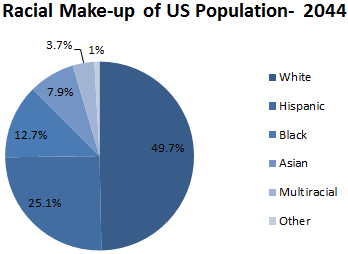 New population projections released by the U.S. Census Bureau show that whites will become a “minority” by 2044, replaced by a “majority” of minority groups, mostly blacks and Hispanics.

The new projections, analyzed in a Brookings Institution report, show the huge rise of Hispanics, projected to make up 25.1 percent of the U.S. population in 2044, double African-Americans.

Brookings attributed the shift to a “majority minority nation” this way:

— The white population is projected to increase modestly until 2025 when it reaches 199,867,000; after that, it will sustain a continued decrease until 2060 when whites will make up only 44 percent of the population. Natural decrease, the excess of deaths over births, for this aging population will be the primary component of this decline.

— A growth of new minorities — Asians, Hispanics and multiracial persons. Between 2014 and 2060 both the Asian and Hispanic populations will more than double at growth rates of 129 percent and 115 percent respectively. Multiracial persons will more than triple, growing at nearly 220 percent. These new projections assume a greater gain for Asians than in previous projections but reduced gains for Hispanics. The former reflects rising Asian immigration and the latter a drop-off in Hispanic fertility.