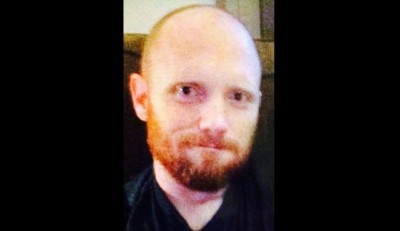 An Iraq war veteran suspected in a shooting rampage that left six of his estranged family members dead remained at large late Monday as the manhunt continued north of Philadelphia.

The victims included his ex-wife, her mother, her grandmother, her sister, her brother-in-law and a niece. A nephew was wounded.

Former Marine Sgt. Bradley William Stone, 35, also may have abducted his two daughters from his ex-wife’s home, a witness said, but dropped them off with a neighbor before he vanished. By late Monday night, the manhunt had spilled from Montgomery County into Bucks County, leading residents in Doylestown to shelter indoors.

Stone, of Pennsburg, was being sought on suspicion of shootings in the towns of Lansdale, Lower Salford Township and Souderton. The communities are 35 to 50 miles north of Philadelphia.

Montgomery County law enforcement officials described a series of attacks that began at 3:30 a.m. and continued until 5 a.m., until Stone dropped off his daughters and disappeared, abandoning his vehicle and his cellphone.

A possible sighting of Stone took place Monday night: The township of Doylestown said an attempted armed robbery took place about 7 p.m. local time involving a man whose description was similar to that of Stone. A white man dressed in camouflage clothing and carrying a knife demanded car keys from a person walking a dog, the township said on Facebook. The victim had a gun and fired at the man, who ran away, the township said.

Nicole and Bradley Stone had divorced in 2009.

“They’ve been fighting for years, real bad,” a neighbor, Michele Brewster, told the Allentown Morning Call. “He’s been tormenting her. She’s gone to the police, and she has told everybody, ‘He’s going to kill me.”’

The Stones had been involved in a protracted custody battle over their two daughters, according to a friend of Bradley Stone.

“She was trying to hold the kids from him, and he just snapped,” theorized Matthew Schafte, 42. “But to snap by killing her family members is not the Brad that I know.… He was a nice guy.” Schafte, of Harleysville, said he has known Stone for 20 years.

Stone was seen around 5 a.m., when he “delivered” his two daughters to a neighbor in Pennsburg, Montgomery County District Attorney Risa Vetri Ferman told reporters at a brief news conference.

The girls were safe, Ferman said. But much of their extended family is now dead.

Flick’s 17-year-old son was injured in the attack and was apparently not found until shortly before 8 a.m., when authorities visited the home and took him to a hospital, Ferman said. His name was not released and the extent of his injuries was not known.

Nicole Stone’s mother and grandmother were found dead at a home in Lansdale after a hang-up 911 call was placed to police at 4:25 a.m., Ferman said. Officials did not give their names.

Nicole Stone was found dead in Lower Salford Township after a 911 call from a neighbor at 4:55 a.m., Ferman said.

“I heard a ‘pow,’ and I thought, ‘Was that a gun?'” Brewster, Nicole Stone’s neighbor, told the Morning Call.

Another neighbor, Ashley Deane, told the newspaper she heard what sounded like four gunshots and could hear children screaming for their mother.

Deane said she could hear her neighbor’s ex-husband telling the children that they had to leave. She said she looked out the front window and saw him with the children, ages 5 and 7, who were in their pajamas.

The ex-husband looked at Deane and said, “She’s hurt,” referring to his ex-wife, Deane told the Morning Call, adding that the ex-husband and the children then got in a car and sped off.

The manhunt forced local schools to shelter in place as authorities spent the day hunting for the balding, red-haired Bradley Stone, whom officials consider armed and dangerous. Local media reported that SWAT teams swarmed his home in Pennsburg, but he remained at large.

A Facebook page under Stone’s name said he had a son and showed a photo of him kissing the bride at a wedding. Among favorite quotes listed on the Facebook page: “If you [expletive] with me, I’ll kill you all,” and “Be polite, be professional, but have a plan to kill everyone you meet.”

Stone’s friend Schafte described him as being focused on the Marines and on his children, including a son with a new partner.

“He loved life, he loved his country, he went to serve, he was so proud of his babies, especially when he got married to Nicole,” Schafte told The Times, adding that around town “he’d be a bartender or help out or go to the local legion or VFW — it was all about veterans.”

The Marine Corps confirmed Stone’s service, telling the Los Angeles Times that he enlisted as a reservist in 2002 and left duty in 2008, but remained on individual ready reserve in case of a call-up until 2011.

Stone served in Iraq from April 17, 2008, to July 2, 2008, the only deployment on his record, according to a spokeswoman for the Marines.

He earned an Iraq Campaign Medal — indicating service in Iraq — in addition to a Global War on Terrorism Service Medal and other commendations. His job included monitoring weather conditions for artillery.

His record did not mention any injuries suffered in the service, a Marines spokeswoman said.

But in court documents relating to a child support disagreement filed in Montgomery County that was obtained by the Morning Call, Stone described himself as “permanently disabled according to the Veteran’s Administration.”

Montgomery County law enforcement officials said Stone often used a cane or a walker and, as a fugitive, may be wearing military fatigues. Officials say he may have shaved off his reddish facial hair.

“I’m totally shocked, I’m upset,” Schafte told The Times. “I just can’t see him doing this because, you know, he was the type of kid that loves life, man.”

By Monday night, as the search moved into Bucks County, locals and officials were jittery, reporting possible sightings or noises.

“It would be best if everyone in the Doylestown area please stay locked in, turn on your outside lights!” tweeted a Doylestown EMS director, Chuck Pressler. “PLEASE STAY INDOORS.”

But even staying indoors was hazardous for officials, who received a report of a possible sighting or attempted burglary from a local resident. “That homeowner is a little freaked out,” one official warned his colleagues over emergency dispatch. “He’s armed inside the house.”