Abbas calls the killing of Palestinian minister by Israel “barbaric” 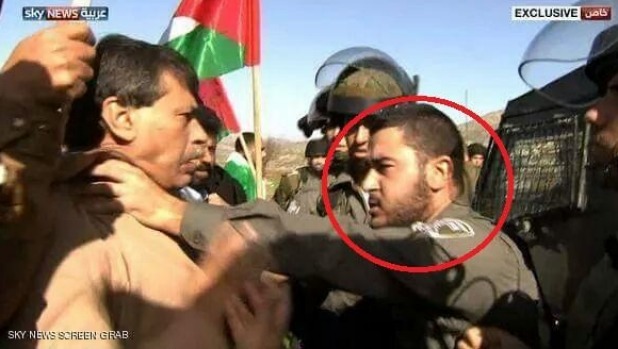 A still of Sky News television coverage showing an Israeli soldier with his hands around the throat of Palestinian government minister Ziad Abu Ein shortly before he collapsed. Photo: Sky News
Share:

A Palestinian minister died on Wednesday shortly after an Israeli border policeman shoved and grabbed him by the throat during a protest in the West Bank, an incident Palestinian President Mahmoud Abbas described as barbaric.

Ziad Abu Ein, 55, a minister without portfolio, was among scores of Palestinian and foreign activists who were confronted at an Israeli checkpoint in the occupied Palestinian territory while heading to a demonstration against Jewish settlements.

Around 30 Israeli soldiers and border policemen fired tear gas and sound grenades at the group and a scuffle ensued in which one border policeman pushed Abu Ein and grabbed his neck firmly with one hand. Footage of the incident and pictures taken by Reuters do not show Abu Ein responding with any violence.

Minutes later the minister began to look faint and fell to the ground clasping his chest. He died on his way to hospital.

It was not clear what caused his death. An autopsy is being carried out with Palestinian, Israeli and Jordanian pathologists present, with the results expected later on Wednesday.

The incident comes at a time of heightened tension between Israel and the Palestinians, following months of violent unrest in Jerusalem, Tel Aviv and the Israeli-occupied West Bank.

Clashes broke out in a refugee camp near Ramallah and an Israeli soldier shot and critically wounded a Palestinian youth, Palestinian medics said. Ramallah shops were shuttered for the day in protest at the minister’s death.

Israel’s army spokesman said the march toward the settlement involved “approximately 200 rioters” and was stopped by its forces using “riot dispersal means.” Footage shows the marchers moving peacefully toward the demonstration, although at one point an Arab man struck an Israeli soldier with a flag.

The Israeli military said in a statement it was investigating the circumstances that led to Abu Ein’s death.

Abbas described the incident as “a barbaric act which we cannot be silent about or accept”. He announced three days of national mourning and said “necessary steps” would be taken after an investigation.

Abu Ein, who was convicted of killing two young Israelis in a bomb attack in 1979 and released as part of a prisoner swap in 1985, was a vocal opponent of Israel’s settlement building in the West Bank, which Palestinians want as part of an independent state together with Gaza and East Jerusalem.

A leader of Palestinian civil society groups for decades, Abu Ein was a regular attendee of non-violent protests and was appointed this year to head a government-backed protest group, the Committee to Resist Settlements and the Wall.

Shortly before his death, Abu Ein spoke to television reporters, sounding hoarse and short of breath.

“This is the terrorism of the occupation, this is a terrorist army, practicing its terrorism on the Palestinian people,” he told the official Palestine TV. “We came to plant trees on Palestinian land, and they launch into an attack on us from the first moment. Nobody threw a single stone.”

Ten Israelis and a foreign visitor have been killed by Palestinian assailants over the past three months, while more than a dozen Palestinians have also been killed, including most of those who carried out the attacks.

Palestinian officials indicated that cooperation between Palestinian and Israeli security forces in the West Bank could be suspended as a result of Abu Ein’s death.