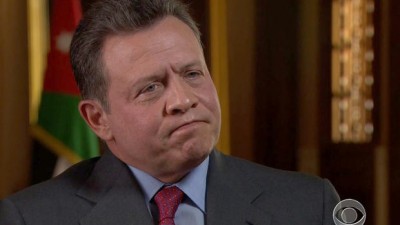 Jordan’s King Abdullah believes battling the Islamic State of Iraq and Syria ( ISIS) and other terrorist groups is “our third world war.”

Speaking to “CBS This Morning,” Abdullah stated that ISIS is a Muslim problem that they need to take ownership of.

“We need to stand up and say what is right and what is wrong. This is no reflection of our religion. This is evil and all of us have got to make that decision,” Abdullah, who is in Washington to meet with President Barack Obama, said. “We have to stand up and say this is the line that is drawn in the sand and those that believe in right should stand on this side and those that don’t have to make a decision should stand on the other. It’s clearly a fight between good and evil. I think it’s a generational fight. As I said to President Putin, I think this is our third world war by other means.”

The United States, along with allies, have been bombing ISIS targets in both Syria and Iraq. The terror group has released several videos showing the beheadings of Americans and British journalists and aid workers.

Abdullah is calling for a “strategic holistic approach” to deal with ISIS.

“We have to have sooner, I hope, rather than later a strategic holistic approach to being able to deal with all these organizations that actually are the same – different names, but the same beliefs.

The Jordanian king laid out how the world should take on ISIS.

Abdullah added that many leaders in the Muslim world are fed up with ISIS and want to do something about it.

“There’s a lot of leaders through the Arab and Muslim world that have had enough and that want to come out in a voice and say, ‘Enough is enough,’” Abdullah said.

Republican lawmaker Rob Wittman of Virginia called Abdullah a key ally in the fight against ISIS. Wittman, along with other members of Congress, visited Jordan last week.

“The U.S. can help, but this effort needs an Arab face,” said Wittman, who chairs the readiness subcommittee of the House Armed Services Committee.

Jordan is one of five Arab nations participating in a U.S.-led airstrike campaign.

“All the Arab and Muslim nations need to come together to combat ISIS,” Wittman said. He spoke in a telephone interview after returning from a five-day trip to Qatar, Afghanistan and Jordan.

Wittman called the Islamic militant group a “formidable force,” but said the U.S. and its allies have made progress to degrade it.

Still, airstrikes alone are not enough to defeat the militants, he said. But Wittman said he does not see a need for U.S. ground troops in Syria.

Obama authorized the deployment of up to 1,500 more American troops to Iraq last month. That could more than double the total number of U.S. forces to 3,100.