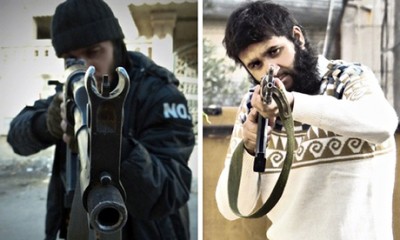 Two Britons who fought in Syria and were arrested upon returning to Britain after their families cooperated with the police were sentenced to long prison terms on Friday. The case has provoked debate over how to reduce the risk posed by returning jihadists without discouraging their families from cooperating with the authorities.

The two men, Mohammed Ahmed and Yusuf Sarwar, had concealed their plans to travel to Syria in May 2013, but after they left, Mr. Sarwar’s mother found a letter explaining her son’s decision to “do jihad.”

Mr. Sarwar’s family went to the police, and when the men, both 22 and childhood friends from Birmingham, returned to Britain in January, antiterrorism officers were waiting at Heathrow Airport near London.

On Friday, Judge Michael Topolski sentenced the men to 12 years each in prison, saying they had “willingly, enthusiastically and with a great deal of purpose, persistence and determination embarked on a course intending to commit acts of terrorism.”

“Both of these defendants are fundamentalists who are interested in and deeply committed to violent extremism,” the judge said at Woolwich Crown Court.

While praising the bravery of Mr. Sarwar’s mother, Judge Topolski said he was not able to reflect that in sentencing her son.

Peter Neumann, the director of the International Center for the Study of Radicalization at King’s College London, said the sentence would “definitely send the wrong message to families who, in 90 percent of cases, don’t want their kids to go to Syria and don’t want them to be jihadis.”

“As a result of this court case, they will not enlist the support of the authorities because they will understand that their kids will go to prison — and for long periods,” Mr. Neumann said.

Mr. Ahmed’s family said that they, too, had assisted the police, and in a statement, they said, “We feel completely betrayed,” and they criticized the sentence as “too long,” the BBC reported.

Two other cases came before courts in Western Europe on Friday, highlighting the authorities’ concerns that those who fight abroad may come home to commit terrorism. Security officials estimate that about 3,000 Western Europeans have left their home countries to fight in Syria.

Also in Britain on Friday, Mashudur Choudhury, 31, was sentenced to four years in prison after being convicted of preparing for acts of terrorism in Syria.

And a court in Frankfurt sentenced a 20-year-old man who had traveled toSyria to fight with a group associated with the Islamic State to three years and nine months in juvenile detention, Germany’s first conviction of a returned jihadist.

The man was identified only as Kreshnik B. because he was tried as a juvenile; German law allows young adults to be tried as juveniles if they are deemed to lack the maturity of an adult. The man’s sentence was focused on rehabilitation after he confessed to willingly quitting the militant group, also known as ISIS or ISIL, to return home.

Kreshnik B. told the court that while in Syria, he grew bored and frustrated that he and other Europeans with no prior military training were given limited responsibilities and sidelined from major battles.

Last month, the French authorities sentenced a returned jihadist to seven years in prison, and Britain sentenced two brothers to prison (one for three years, the other for four and a half years) for conspiring to attend a terrorist training camp in Syria.

The cases offer some prosaic details about those who leave to fight in Syria. Judge Topolski’s court heard that the two men sentenced Friday were believed to have spent time with the Nusra Front, a group affiliated with Al Qaeda, and that when the men were stopped at Heathrow, the police found traces of explosives on their clothing and pictures of them brandishing weapons.

The court was also told that Mr. Ahmed and Mr. Sarwar had ordered a book from Amazon called “Islam for Dummies.”