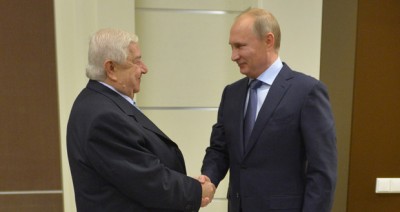 Russia said on Wednesday it would support President Bashar al-Assad to combat “terrorism” in the Middle East, indicating there was no new room for compromise on one of the key contentious issues in the Syrian conflict.

“We share the view that the main factor driving the situation in the Middle East is the terrorist threat,” Lavrov told a joint news conference with Moualem. “Russia will continue supporting Syria … in countering this threat.”

Russia has been the key international ally of Assad in the conflict, which is in its fourth year and where the situation on the ground has deteriorated as Islamic State, an al Qaeda offshoot, grabbed large swathes of land.

The last round of talks between Damascus and the opposition collapsed in February over rifts over Assad’s role in any transition out of the conflict. The main Syrian opposition in exile and its Western and Arab backers want him to go.

But Moscow says advances made by Islamic hardliners mean fighting “terrorism” should be the top priority for all “healthy” forces now and says that is not possible without cooperating with Assad.

Lavrov criticized the United States for refusing to do that.

Moualem told the news conference his meeting with Vladimir Putin earlier on Wednesday was “very productive” and that the Russian president confirmed his resolve to develop ties with Damascus and Assad.