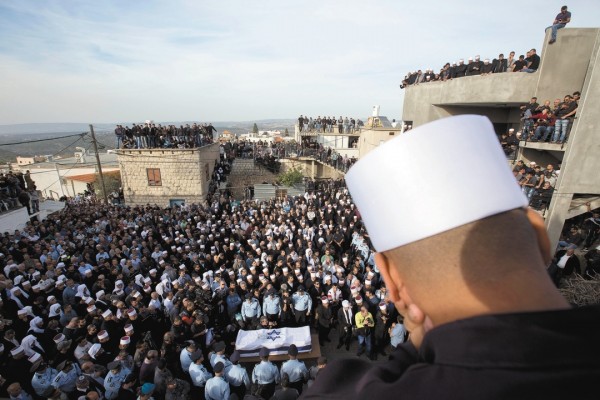 AFTER an angry debate, the Israeli cabinet has endorsed a controversial bill declaring the country a Jewish state, a move that will alienate the Palestinian minority further and push the government closer to early elections.

The bill affirms that Jewish law should inspire the Israeli legal system, and reserves other “national rights” for Jews, including the right to immigrate. If passed by the full Knesset, it would become a “basic law,” akin to a constitutional amendment.

The cabinet session was closed to the press, but MPs could be heard shouting at each other inside. Fifteen ministers voted in favour, with six opposed, including Tzipi Livni, the justice minister.

“[ISRAEL] has equal individual rights for every citizen, and we insist on this,” he said. “But only the Jewish people have national rights.

Several drafts of the bill have circulated in recent weeks, some of which proposed dramatic steps, such as stripping Arabic of its status as an official language. The version approved yesterday will not bring immediate changes, but experts say it will make it easier for the Knesset to approve discriminatory laws, and for the high court to uphold them.

Yehuda Weinstein, the attorney-general, warned that it would cause a “deterioration of the democratic characteristic of the state”.

Yohanan Plesner, the president of the Israel Democracy Institute, said the proposal “smacks of populist politicking”.

“[IT] touches on raw nerves at an especially delicate moment in our nation’s history. It does not mention the principle of equality, thereby minimising Israel’s democratic essence,” he said. Mr Netanyahu is also drafting a separate bill that would strip residency status and social benefits from Palestinians who commit attacks, as well as their families. Most of the attackers have been from east Jerusalem, who hold Israeli residency but not citizenship.

Last week Israel also escalated the controversial practice of punitive home demolitions, blowing up the home of Abdel Rahman al-Shaloudi, the Palestinian who carried out a hit-and-run attack on Israelis on October 22. The demolition left seven of his relatives homeless. Three other homes are due to be demolished this week.

Mr Netanyahu’s support for such laws is widely seen as an effort to shore up his right flank before early elections. A budget crisis has already brought his unwieldy coalition of centre-left and far-right parties to the brink of collapse, and a rash of deadly attacks over the past month has piled more pressure on the government.

Mr Lapid, who heads the centrist Yesh Atid party, called it “a bad law, which is badly worded”. After voting against the bill, his faction held an emergency meeting to discuss further steps.

Eleven Israelis have been killed in shootings, stabbings and hit-and-run attacks, including five people murdered at a Jerusalem synagogue last Tuesday.

Political analysts say Mr Netanyahu wants to push out Yair Lapid, the centre-left finance minister who is increasingly critical of his policies. Mr Lapid said that the bill declaring Israel a Jewish state would alienate Palestinian citizens of Israel, who make up about 20 per cent of the population. They enjoy equal rights under the law, but in practice have long been subject to discrimination.

Last week the mayor of Ashkelon tried to ban Palestinian construction workers from schools, a move met with derision.

“This morning I spoke with the family of Zidan Saif,” Mr Lapid said, referring to a police officer from the Druze sect who was killed in a shootout with the synagogue attackers. “What can we say to this family? That he is a second-class citizen?”

Mr Netanyahu has published his own wording for the proposed law, listing 14 principles that include declaring that “the State of Israel is democratic and founded on the principles of liberty, justice and peace in accordance with the visions of the Prophets of Israel”.

The draft, which was released to the media, pledges to “uphold the individual rights of all of Israel’s citizens”, but also says that only the Jewish people have a right of self-determination in Israel.

The phrasing appears to rule out any bi-national state with the Palestinians, but makes no reference to the independent country they seek in the Gaza strip and the occupied West Bank and east Jerusalem in a stalled peace process brokered by the US.

“A flag, anthem, the right of every Jew to immigrate to the country, and other national symbols. These are granted only to our people, in its one and only state,” Mr Netanyahu said in public remarks at the cabinet meeting.

The citizenship bill goes to the Knesset on Wednesday. Arabs make up about 20 per cent of Israel’s population and strongly oppose it.

The recent unrest has centred on Jerusalem’s most sensitive holy site, a hilltop compound revered by Jews and Muslims.

Muslims fear that Israel is plotting to take over the site, a charge that Israel denies. They are also upset about Israeli restrictions that have limited access for Muslim worshippers on security grounds.