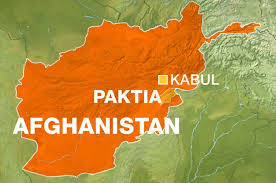 A suicide bomber walked into a crowd of spectators at a volleyball match in eastern Afghanistan and detonated his explosives vest on Sunday, killing at least 40 people, a provincial official said.

Paktia provincial spokesman Mukhles Afghan said at least 50 more were wounded in the attack in Paktia province, where hundreds had gathered to watch a tournament final.

He said most of the casualties were civilians.