Biden discussed in Turkey ISIS and transition of power in Syria, away from Assad. 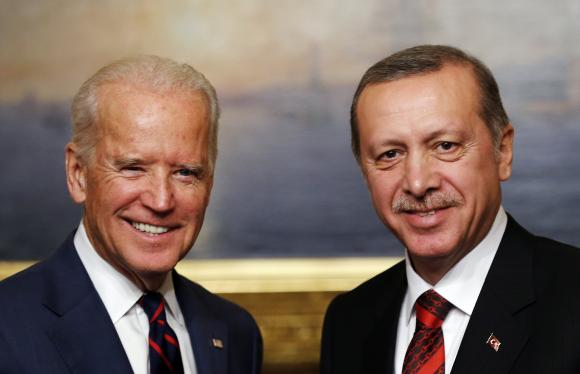 U.S. Vice President Joe Biden (L) meets with Turkey’s President Tayyip Erdogan at Beylerbeyi Palace in Istanbul November 22, 2014. REUTERS/Murad Sezer
Share:
US vice-president Joe Biden on Saturday warned that a concentration of powers under a head of state was “corrosive” as he visited Turkey – which has been accused of increasing authoritarian tendencies.

Biden made the remarks before meeting Recep Tayyip Erdogan, who in August became the Turkish president after more than a decade as prime minister. Critics have accused Erdogan of seeking to centralise powers in a powerful presidency, which until he took office was largely a ceremonial role.

At a joint news conference held after a four-hour talks session, Biden said he and Erdogan had discussed a transition of power in Syria, away from President Bashar al-Assad.

Turkey has been a reluctant partner in the US-led coalition against Islamic State (Isis) insurgents in Syria and Iraq, pushing for a more comprehensive strategy that includes Assad’s removal from power.

“On Syria, we discussed … not only to deny [Isis] a safe haven and roll back and defeat them, but also strengthen the Syrian opposition and ensure a transition away from the Assad regime,” Biden said.

Earlier, speaking to an umbrella group of Turkish civil society groups known as the Checks and Balances Network, Biden noted that in the US the three branches of power – presidency, legislature and judiciary – are equal in status.

“Our founders concluded that a concentration of powers was the most corrosive thing that can happen to any system,” he said. “We still believe that,” he added.

Biden did not specifically refer to Turkey in his remarks, which were open to the press ahead of a closed-door meeting, saying he was not in Istanbul to “proselytize”. But he added: “The best way to preserve freedom is not to have too much power concentrated in any branch of government.”

He said his own insistence on the issue was so great that Barack Obama “joked with me that I thought Congress should have more power than he does”.

If he serves two presidential terms, Erdogan could stay in power until 2024. His party is hoping to win a large majority in Turkish legislative elections next year, in order to change the constitution to a more presidential system. Critics have accused Erdogan of seeking to diminish the importance of the Turkish parliament and also seeking to make the independent judiciary far more pliant.

Biden also called on Europe to continue diversifying its energy supplies in order to reduce dependence on Russia, which he said should not be allowed to use its vast gas and oil resources as a geopolitical tool.

Speaking at the Atlantic Council’s energy security summit, Biden said: “Now, now, now is the time to act. What’s happening in Ukraine only underscores the urgency.”

Moscow had cut off gas supplies to Ukraine in June over unpaid debts, a move that followed the ouster of Ukraine’s Russia-friendly leader and the Kremlin’s annexation of Crimea in March. Talks dragged on for five months amid fighting in eastern Ukraine between pro-Russian insurgents and government troops. But the looming onset of winter a fierce, freezing season in Ukraine gave the talks increased urgency.

“We have been aware that this single source of energy has been a problem for a long time,” Biden said. “But my message is not that Europe can or should do away with Russian imports.”

He said he had no doubt that Russia would continue to be a main energy supplier in the region.

“This is about energy security. To achieve it, Europe needs to ensure it diversifies,” Biden said. “Russia can and should be a player, but Russia has to play by the rules.”