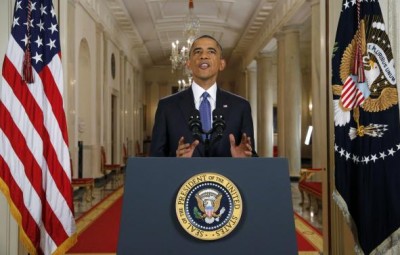 President Barack Obama imposed the most sweeping immigration reform in a generation on Thursday, easing the threat of deportation for some 4.7 million undocumented immigrants and setting up a clash with Republicans who vow to fight his moves.

In a White House speech, Obama rejected Republican arguments that his decision to bypass Congress and take executive action was tantamount to amnesty for illegal immigrants.

It was his biggest use of executive actions in a year in which they have become his signature way of working around congressional gridlock.

“Amnesty is the immigration system we have today, millions of people who live here without paying their taxes or playing by the rules,” he said.

Republicans pounced quickly, charging Obama had overstepped his constitutional powers a year after declaring he did not have the authority to act on his own.

In a video released before Obama’s televised speech, House of Representatives Speaker John Boehner said: The president has said before that ‘he’s not king’ and he’s ‘not an emperor,’ but he sure is acting like one.”

With 11 million undocumented immigrants in the United States, Obama’s plan would let some 4.4 million who are parents of U.S. citizens and legal permanent residents remain in the country temporarily, without the threat of deportation.

Those undocumented residents could apply legally for jobs and join American society, but not vote or qualify for insurance under the president’s healthcare law. The measure would apply to those who have been in the United States for at last five years.

An additional 270,000 people would be eligible for relief under the expansion of a 2012 move by Obama to stop deporting people brought illegally to the United States as children by their parents.

The president, speaking two weeks after he and his Democrats were trounced in midterm elections, appeared confident and determined at the White House podium. Outside, pro-migrant demonstrators watched his speech on their smartphones and chanted support for him.

“Si se puede (Yes we can),” they shouted and sang the American national anthem.

Obama urged Republicans not to take steps against his plan that could lead to a government shutdown, raising the specter of a crisis that some conservatives would like to push but Republican leaders of Congress want to avoid.

Republicans were blamed for a shutdown over spending a year ago and are seeking ways to deny funding for his immigration steps without provoking a year-end budget crisis.

“Congress certainly shouldn’t shut down our government again just because we disagree on this,” Obama said.

Obama’s moves have ramifications for the campaign to succeed him in 2016 by possibly solidifying Hispanic support behind Democrats. Republican candidates may tread carefully around the issue to avoid a Latino backlash. But polls show many Americans would prefer Obama not act alone.

Obama said trying to deport all 11 million people living in the country illegally was not realistic. His voice took on an empathetic tone as he described the struggle of illegal immigrants to avoid getting deported.

“I’ve seen the heartbreak and anxiety of children whose mothers might be taken away from them just because they didn’t have the right papers,” he said.

But Michael McCaul, Republican chairman of the House Committee on Homeland Security, warned: “We will see a wave of illegal immigration because of the president’s actions, and in no way is the Department of Homeland Security prepared to handle such a surge.”

He pledged to “use every tool at my disposal to stop the president’s unconstitutional actions from being implemented.”

Lindolfo Carballo of Arlington, Virginia, who was among the demonstrators outside the White House, said: “It is personal for him (Obama), I think.”

Obama said his actions were the kinds of steps taken by Republican and Democratic presidents for the past half century.

“And to those members of Congress who question my authority to make our immigration system work better, or question the wisdom of me acting where Congress has failed, I have one answer: Pass a bill,” he said.

Some legal analysts said Congress could struggle to win a lawsuit to overturn the action since presidents have historically had broad authority to act on immigration.

“When an issue is mostly political, the judicial branch generally is not going to want to step in the middle of a dispute between the executive branch and the legislature,” said Ted Ruthizer, an immigration attorney at Kramer Levin.