Are George and Amal Clooney Looking To Adopt? 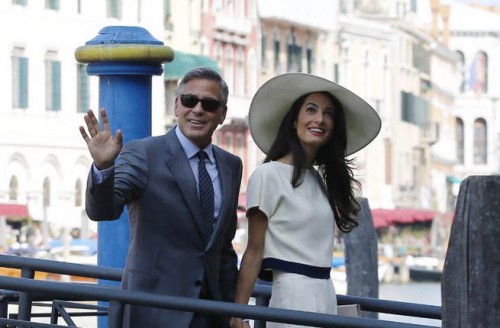 As they settle into wedded bliss, it’s only natural that George and Amal ( Alamuddin) Clooney are thinking about the next step in their marriage.

And it’s now been revealed that the handsome pair are rumoured to be making plans to welcome their first child.
The latest issue of Woman’s Day Magazine speculates that the Clooneys are looking to adopt an orphan from a war-torn country, although the couple have not addressed or confirmed the reports.

A source told the magazine that the 53-year-old actor and the stunning 36-year-old human rights advocate lawyer are hoping to use the ‘adoption to highlight the plight of orphans in countries like Syria.’

But even if the couple are looking to adopt, it’s unlikely they will be able to do so in Syria under American law, as the US embassy in Damascus states that Syria ‘as a Shari’ah law country, does not recognize or provide for adoptions of Muslim children. Several attempts by U.S. prospective adoptive parents have failed,’ and also states: ‘the Embassy’s understanding is that until specific Decree 76-compliant previsions have been developed to address adoption for specific denominations, it is not possible to adopt in Syria.’

George and Amal married in front of family and a host of celebrity pals in Venice, Italy in October.

The couple tied the knot at the seven-star Aman Canal Grande Hotel in a ceremony conducted by their close friend and ex-mayor of Rome, Walter Veltroni.