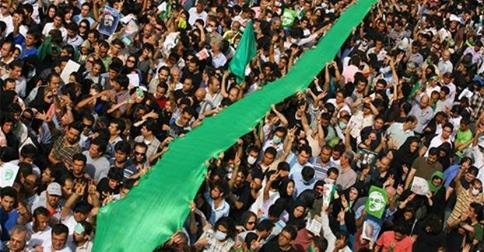 Lebanese authorities have banned the screening of a film depicting the 2009 post-election “Green Movement” protests in Iran, organizers of a local film festival said on Sunday.

“‘The Silent Majority Speaks’, the admirable visual essay of filmmaker Bani Khoshnoudi, has been censored in Beirut,” a statement from the Cultural Resistance International Film Festival organizers said.

“The film was to be screened tonight… At noon, the Censorship Committee served notice to the festival’s organizers that it was banned for ‘insulting a foreign country,'” the statement added.

“The organizers of the festival protest this ban, which risks depicting Lebanon as a backwards and unenlightened country in the eyes of the international community.”

Lebanon’s Censorship Committee is part of the General Security agency and monitors all films before screening in the country.

The film, a documentary, includes scenes depicting the protests that erupted in Iran after the 2009 presidential elections that returned Mahmoud Ahmadinejad to power despite claims of election fraud.

“There is nothing in the film that justifies the ban,” she told AFP.

“It narrates what happened in a beautiful artistic way and is not intended to criticize or attack but to create dialogue,” she added.

Lebanon is considered one of the most open societies in the Middle East, but art is occasionally censored, usually for sexual content or sensitive religious issues, rather than for political reasons.

The Cultural Resistance Film Festival is in its second year and is screening movies in five locations in Lebanon.