Putin walks out of G20 summit ‘to go to sleep’ 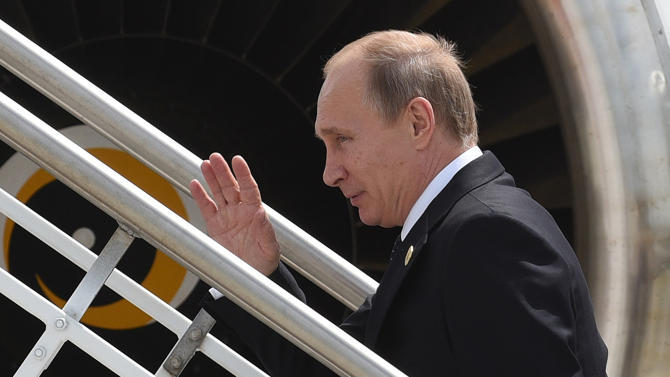 Russian President Vladimir Putin has left the G20 summit in Brisbane early after he came under intense pressure from the West over Moscow’s alleged support for separatist fights in eastern Ukraine.

The two-day summit, which gathered the leaders of the world’s largest economies in Brisbane, ended on Sunday evening, with Putin exiting the Australian city hours earlier.

Putin said his decision to fly home had nothing to do with tensions over Ukraine, saying he had a long flight and wanted to catch up on some sleep ahead of a full day’s work on Monday.
“We need nine hours to fly from here to Vladivostok and another nine hours from Vladivostok to Moscow,” he said in comments reported by the RIA Novosti news agency.

“Then we need to get home and return to work on Monday. There is a need to sleep at least four to five hours.”

The agenda of the summit focused on economic growth but was, to some extent, overshadowed by the tension over Ukraine.

Leaders at the event, who included US President Barack Obama and his Chinese counterpart Xi Jinping, committed to reform measures aimed at lifting their collective growth by an extra 2.1 percent by 2018.

“This will add more than $2 trillion to the global economy and create millions of jobs,” the leaders said in the summit communique.

The fact that the Russian President left before the official communique announcement could be seen as a snub, Al Jazeera’s Andrew Thomas, reporting from Brisbane, said.

“But it has been the case that he himself was snubbed by Western leaders,” Thomas said.

On Saturday, in unusually frank language between two leaders, Stephen Harper, the Canadian prime minister, was reported to have told Putin as they shook hands to “get out of Ukraine”.

British Prime Minister David Cameron was among other leaders who publicly criticized Russia, accusing it, of “bullying a smaller state in Europe” and warning that Moscow would face further sanctions if it continues “destabilizing Ukraine”.

Putin, in remarks made before he left, thanked Tony Abbott for hosting the event, despite the Australian prime minister threatening to confront him over the shooting down of Malaysia Airlines Flight MH17 over Ukraine in July.

The West says the Malaysia Airlines plane was downed by pro-Russian rebels, using a missile supplied by Russia. Moscow denies the charges.

The plane was carrying 298 people, including 38 Australian citizens and residents.

“This year, the G20 has delivered real, practical outcomes and, because of the efforts that the G20 has made, this year, culminating in the last 48 hours, people right around the world are going to be better off,” Abbott said in his closing remarks.