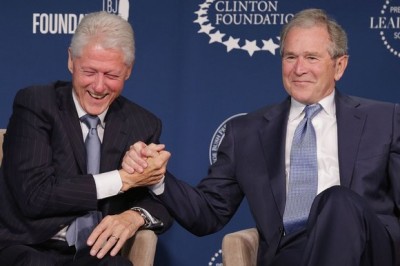 GEORGE W BUSH has described Bill Clinton, his fellow former American president, as a “brother from another mother” and has given details of his unlikely friendship with the man who in 1992 had denied Bush’s father a second term in the White House.

The two men, both 68, have bonded over becoming grandfathers. Bush’s twin daughter Jenna gave birth to a daughter, Mila, in April last yearand Clinton’s only child, Chelsea, had a girl, Charlotte,in September.

In an interview with The Sunday Times in his high-rise office in Texas, Bush said that he and his father, President George HW Bush, 90, had telephoned Clinton to congratulate him.